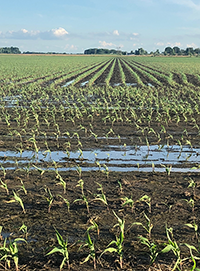 As of early April 2020, the National Oceanic and Atmospheric Administration (NOAA) Climate Prediction Center warns that significant rainfall events could trigger flood conditions on top of saturated soils in the upper Midwest, along the Mississippi River valley from Iowa through Missouri and Illinois.

“We’ve got the section east of the Mississippi, especially east of I-55, and the southeast through the Ohio Valley into the Delta that has seen the heaviest rain pattern this spring, and will continue to, according to current patterns,” Anderson says. “So those two large areas are really under the gun for continued problems.” 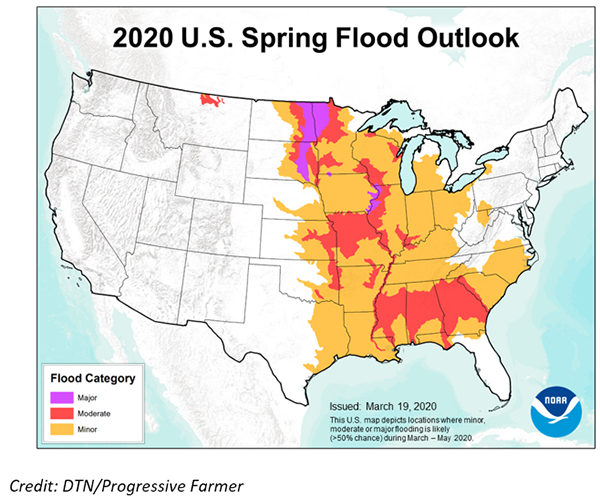 Currently the western half of Illinois, into northern Missouri, southern Iowa and eastern Nebraska are not quite as saturated, or as cold, compared to one year ago, Anderson adds. “The northern states, still melting some snowpack, remain a challenge this spring, on top of already soggy soils. They had record precipitation last year in the Dakotas, Minnesota, Wisconsin and Michigan, that you just don’t change in the space of a few months.”

Near-normal precipitation
This spring, it doesn’t appear that the ocean is going to cool down to go into a La Nina phase, so that will keep precipitation near normal. “With this wet ground, normal rainfall only causes more problems,” Anderson says. “But the flood scenario will be less than last year, which wouldn’t take much since we saw record runoff, especially in the Missouri basin. I’m calling for a runoff of about 34 million acre-feet, which would be the 9th largest in history, but a far cry from last year’s 60.9 million acre-feet (maf)—which came close to the 2011 record of 61 million,” Anderson says. Average runoff is 25.8 maf.

Temperature outlook
Spring temperatures are following a more normal track through the Corn Belt. “The wetter soils in the north will definitely keep temperatures from rising above normal because you’ve got all that moisture that’s going to evaporate and keep conditions cooler,” Anderson says.

It’s going to be a slower start to spring from Sioux Falls, South Dakota, and north of the I-90 corridor. “We’ll see the biggest delays in the northern areas, but the rest of the Corn Belt should be more normal. I predict that the large majority of corn and soybeans will be planted by the end of May, which is a big difference from a year ago,” Anderson says.

There will still be areas with potential for Prevented Plant acres, especially in North and South Dakota, other parts of the upper Midwest, as well as further east into Indiana and Ohio. “I do think they’re going to have a slower planting season, but it won’t be as long or as problematic as last year,” he adds.