“One of the best things I like about farming is you get a new chance every year,” says Harold Grall, a first-generation farmer in Dumas, Texas, and owner of Hasta Farms.

A Leader in Sustainable Farming

Harold is a leader in conservation practices when it comes to irrigated farming in the High Plains and preserving the Ogallala aquifer. With constant research and new implementation of technology, Harold continues to find ways to produce the highest yield corn with the least amount of water. In the heart of cattle country, Harold markets his corn for livestock feed in the area. 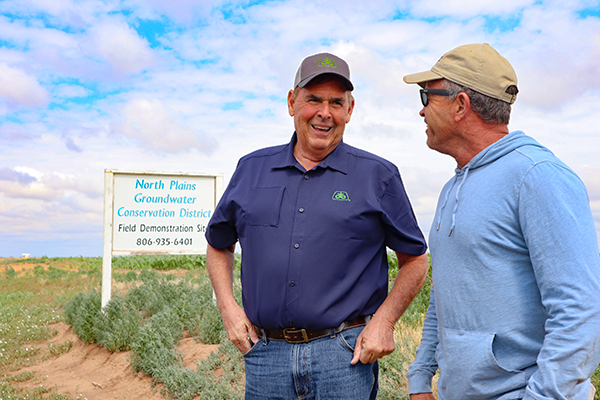 Harold’s mindset is optimistic and future-facing. “Agriculture is one of the largest producers of carbon credits, and I think we will play a large role in that,” Harold said.“ Populations are going to continue to grow…demand for food is just going to continue to grow, and the dependence on farming and good farming practices and all the technology that goes into it will be so important.”

Teaming Up for Success

In order for Hasta Farms to continue to be a successful operation, the job can’t be done without Harold’s team. Harold’s son Dusty runs all of the IT and technology that goes into the day-to-day of the operation. In addition, Harold has several workers who have been with him for more than 20 years, and some who are now second and third-generation employees. When it comes to the summer months, the farm has lots of responsibilities. “This is our busiest time of year...It’s all hands on deck, and everybody here knows that,” Harold said.

With constant research and new implementation of technology, Harold continues to find ways to produce the highest yield corn with the least amount of water.

Having grown up in El Paso, Texas, Harold learned to speak Spanish, and he uses it every day on the farm to communicate with several of his employees.

Harold’s drive and desire to constantly improve is another vital factor in his operation’s success. “It’s a great life; it’s not for everybody, but it’s one I sure do like,” Harold shares.

Beyond his Pioneer® brand seed, essential technology for Harold’s farm are the 25 pivots ranging up to half of a mile, in-field moisture testers, and research on pivot outputs including new LEPA and drag techniques. Harold plays an active role in the research for his Soil and Water Conservation District. His fields are also part of research being done with Granular and soil moisture testing.

These stories were made possible through Corteva’s Open Innovation Initiative, where Corteva believes in bringing the outside in to advance agriculture for all. Ohio State student Mallary Caudill submitted a proposal tell stories of farmers innovating across America and Corteva granted approval for her to visit these farms because they represent ways a diverse group of American farmers are using climate-positive practices to build a better world for the next generation. Corteva believes scientific, societal and agricultural innovations are made through collaboration and inclusion. We are proud to feature how Corteva farmers work for #WhatMattersMost and are #InItForGood.

A farm kid from west-central Ohio, Mallary Caudill is part of the third generation of her family’s grain and livestock farm. When she isn’t home on her family’s operation, she is a student at the Ohio State University studying agricultural communications. She is passionate about all facets of agriculture, for all people, and works to tell stories and learn about the industry she grew up in as much as she can.