In 2017, drought in the northern Plains jeopardized the spring wheat crop and created ideal conditions for increased Canada thistle competition this growing season. 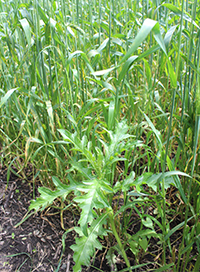 “It was extremely hot in July, there was heavy moisture draw and wheat stands were thin,” says Joe Yenish, field scientist, Dow AgroSciences. “Under that level of stress, the plants began heading, and there wasn’t much ground cover. Canada thistle benefited and expanded its footprint.”

“Canada thistle grows from the roots as well as the seed. Choosing the right chemistry and timing for postemergence control is critical,” Yenish says. “Clopyralid, an active ingredient in PerfectMatch herbicide, is the industry standard for postemergence in-season control of this noxious weed.”

Herbicide program
PerfectMatch® is a broad-spectrum herbicide that effectively controls annual grasses along with annual broadleaves such as perennial Canada thistle.

PerfectMatch can be the foundation of a wheat grower’s weed management program by offering the broadest spectrum in one herbicide solution. With one application, PerfectMatch offers control of 86 broadleaf weeds and 13 grasses, including:

PerfectMatch offers a wide application window for greater flexibility. Apply PerfectMatch in the spring to actively growing wheat from the three-leaf to jointing stage. Apply to grasses at the two-leaf stage to the two-tiller stage of growth and to broadleaves before they are more than 2 inches tall or 2 inches in diameter.