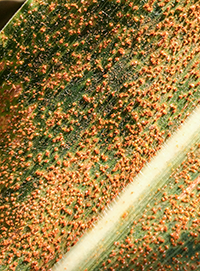 Southern rust in corn (also known as Polysora rust) is a potentially devastating crop disease that has begun spreading further intothe Corn Belt from its traditional home in tropical and subtropical areas. It poses a greater threat than common rust due to its ability to rapidly develop and spread under favorable conditions.

Orange or reddish-orange pustules form on the upper surface of corn leaves. Unlike the elongated, jagged shape of common rust, southern rust pustules are typically circular.

Southern rust is more prevalent in tropical and subtropical regions, including the southern United States. While not traditionally common in the Corn Belt, southern rust has begun to appear further north earlier in the season, particularly when temperatures are higher than average. The disease has been detected in Illinois, Indiana, Iowa, Nebraska, Kansas, South Dakota and Wisconsin in recent years.

This disease typically appears later in the growing season.

High humidity and high temperatures create the perfect conditions for southern rust to develop rapidly. Spores are spread by wind and rain from Mexico and the Caribbean, where the disease overwinters.

Southern rust can cause substantial yield losses if disease pressure is severe. Significant damage to upper leaves early in the life of a hybrid increases potential yield loss. Often the latest-planted corn is at a higher risk for yield loss.

When determining if application is warranted, factors to consider include:

Fungicide treatments are more likely to be profitable during severe rust outbreaks while corn prices are high and with disease presence on younger stage corn.