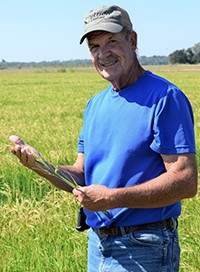 To impregnate fertilizer, retailers spray a 16-ounce-per-acre rate of Loyant herbicide onto granular fertilizer before delivering it to the rice producer or aerial applicator.

“We live in an area where we pinpoint flood, and it’s a natural fit for south Louisiana rice producers,” Fontenot says. “Loyant has become a popular herbicide in the pinpoint flooding system, because it’s very effective when applied in water on young, actively growing weeds and on some of the larger aquatic weeds. That’s the reason Loyant is, and will be, used on a lot of acres down here.”

When water-seeding rice with pinpoint flooding, rice growers plant the rice into the water. The water is then drained, and as soon as the rice pegs, a permanent flood is established.

“It wasn’t uncommon 40 years ago to apply Furadan, Londax and Ordram for weed control. We would put all of that out with nitrogen, phosphorus and potassium (NPK) blended into the irrigation water,” Fontenot says.

Today, he says, some growers impregnate a phosphorus and potassium fertilizer blend with Command herbicide, which is applied to the wet soil surface.

“There is wet seed sitting on the weed seedbed plus phosphorus, potassium and Command out there,” Fontenot says. “When the rice seed is anchored, we will reflood the field and that’s when our aquatics will begin emerging. And while Command does control most grasses, it doesn’t do a lot for broadleaf weed control.”

In Fontenot’s research trials, the growing season begins with a preplant fertilizer application of 250 pounds of 0-23-30 plus zinc. Once the rice seed has pegged, the flood water is brought back. When the rice reaches the five-leaf stage, or first tiller, nitrogen impregnated with Loyant is applied into the flood.

Fontenot says it is time for a nitrogen application when rice begins tillering. That’s the ideal time to apply the nitrogen impregnated with Loyant® herbicide into the irrigation water by air.

“The timing of the nitrogen application hasn’t changed. We are simply combining it with Loyant to save a trip and improve our weed control,” he says. “We struggle with alligatorweed, and it is almost a perennial here.

“Loyant is deadly on alligatorweed, no matter the size. We have almost the same situation with grassy arrowhead, and Loyant takes care of it," Fontenot adds. "Loyant is also a great broadleaf treatment.”

Benefits of the system, Fontenot says, include:

“We live, we work and we plant in the water. Loyant loves the water, and it fits our pinpoint system perfectly,” he says. “Our alternate crop is crawfish, so we live in the water. This is a great tool for weed control. It fits our culture down here, perfectly, and Loyant gives us control until canopy and even later into the season.”

Based on key learnings from his 2020 impregnation studies of Loyant, Fontenot recommends:

“If you put the impregnated Loyant out on time, it fits the weed spectrum present, and you maintain your flood, it is going to work,” he says. “Some growers are just walking away from weed control for the season after that impregnated application of Loyant.”