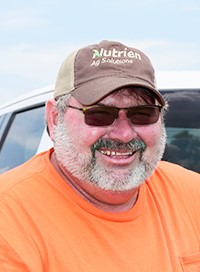 This year may go down in the record books as the wettest in recent memory. Relentless rainfall began at the tail end of the 2018 harvest, continued throughout fall and winter, into the 2019 spring planting season and hasn’t ceased yet.

“It’s been so wet this spring and summer that management has been a challenge and levees were late in getting pulled,” says Elmer Smith with Nutrien Ag Solutions in Heth, Arkansas. “It’s a different world around here, especially this year. These guys make their living on rice.”

The vast majority of Smith’s grower-customers were forced to plant late due to ruts in their heavy, buckshot (alligator clay) soil. “We are two weeks behind schedule. The rice crop is catching up some, but there is a lot more variation than normal in growth stage from field to field,” he says.

Smith’s plan for season-long weed control begins with a tank mix of Command 3ME herbicide, Sharpen herbicide and glyphosate at planting. He then endorses pulling levees early in case there is a need to flush for herbicide activation.

“I don’t like backing off those labeled rates,” he says.

Because water management is critical to achieving adequate weed control, Smith reminds growers to get water on fields as quickly as possible after herbicide applications.

Ideally, three days after the postemergence tank-mix application, rice producers are getting water on the field with the permanent flood.

“I prefer producers turn on irrigation wells the day after that postemergence application,” he says. “That gives 24 hours for the herbicides to penetrate the plants before you put the water to it.”

Included in Smith’s program approach is a ground-applied levee treatment of Loyant® herbicide at 1 pint per acre plus MSO adjuvant at ½ pint per acre. His recommended timing is before internode elongation and prior to midseason.

“It’s amazing what Loyant will do to a pigweed,” he says.

For producers trying to clean up weeds previous applications may have missed, Smith adds a post-flood application of Grasp® SC or Clincher® SF herbicide before any barnyardgrass begins heading.

While he recommends rotating to soybeans and rotating chemistries to control red rice, Smith says, “The very best rotation for pigweed control is rice. That water is doing the lion’s share of the job for you.”