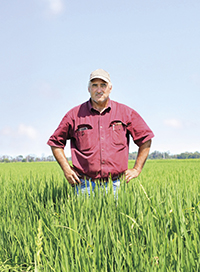 This season, a few producers participated in the Corteva Agriscience™ Field Forward™ program. The on-farm trial offered an opportunity to experience Loyant® herbicide before it was commercially available.

By Mitch Wilson’s estimate, Loyant is saving him $45 per acre in rice fields where he’s battling herbicide-resistant barnyardgrass.

Before adding Loyant to his herbicide program, the grower from Linn, Mississippi, struggled with resistant grasses for almost a decade.

“We had yield-destroying barnyardgrass. It consumed large areas of our fields, taking out other grasses and our rice crop,” Wilson says. “Our barnyardgrass is resistant to almost every herbicide that’s labeled for rice. We couldn’t kill it, and it eventually could come back.”

Wilson put Loyant to the test in 2017 to evaluate the herbicide’s efficacy.

“We put Loyant under extreme pressure, and it did amazingly well on barnyardgrass, large coffeebean and morningglory,” he says.

In his test plot, Wilson applied Roundup®, Sharpen and Command herbicides at planting, followed by a pre-flood treatment of Loyant® herbicide.

Wilson says there’s no doubt the broad-spectrum control in Loyant is a game-changer.

“Before Loyant, good control has always required two applications of a herbicide, one at emergence and one at pre-flood,” he says. “That’s the way it’s been all my life.”

‘You Name It, and We've Sprayed It’

Arkansas rice producer Hunter Carter says he’s willing to try anything to control the multitude of weeds in his rice field. After hearing good things about Loyant herbicide, he and his brother Drew Carter tested it on their operation, Carter Brothers Partnership.

“You name it, and we’ve sprayed it,” Hunter Carter says. “We have such high levels of resistance with barnyardgrass and sedges that we’ll try anything. I know the result of untreated weeds and that’s crop failure.

“We can control the resistant grasses, but we have to use three different chemicals to do it. With Loyant, we only need one.”

His test field for Loyant® herbicide received a burndown treatment of Roundup herbicide and Command followed by an application of RiceBeaux. At the four- to five-leaf stage, he followed with a tank-mix treatment of Loyant and pendimethalin for residual activity.

“It worked wonderfully. It did everything we’d heard it could do,” he says. “It provided complete control of all the grasses and the sedges that were present in the field.

“There are a lot of advantages to the broad-spectrum activity Loyant offers. You don’t use a lot of chemical, you don’t have any mixing problems and it offers a broad spectrum of control.”