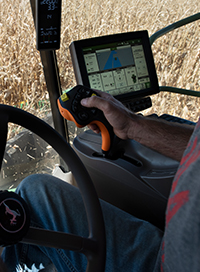 Your quest for better weed control in 2021 begins with your observations from the combine seat this fall. The more notes and photos you take, and geo-referenced tags you mark in fields, the stronger foundation you have to build a solid weed management plan for the new growing season.

Weed problems are easily detected in soybean fields. But corn fields can hide weed problems, creating plenty of potential surprises as you harvest the corn crop. These revelations will no doubt lead to multiple questions: What weed species produced seed heads? Are the weed patches shrinking or growing? Are these late germinating weeds, or did they survive herbicide applications?

These and other questions are important to note and record on your phone, or your field software, if you have the capability.

These pigweed species continue to show the ability to degrade more herbicides, Hartzler says. Paying close attention in the combine (and throughout the growing season) to locations of all the major weed species with multiple herbicide resistances will continue to be critical to develop effective control strategies.

Weed Patch Worries
Mark Loux, Ohio State University weed scientist, recommends waiting to harvest areas of fields with serious weed patches until all other corn fields are done. “Harvesting patches will spread weeds across the field and add weed seed to the combine that will spread to other fields.”

Loux also advises taking note of any weed populations in ditches, field borders, waterways and nearby CRP or wildlife seedings to help prevent the spread of weeds into fields.

The weed species you see this fall that add to the seed bank will likely be your predominant species to battle next season. Loux adds that if you notice an abundance of winter annual weeds, that field or portions of it may benefit from a fall herbicide application.

Sure, you can’t control weeds from your combine. But the visual knowledge you gain during harvest, along with the notes you take and geo-referenced issues you can mark, will provide ample fodder for your winter weed control planning.