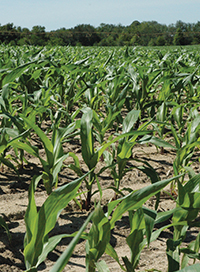 Even with today’s high-quality hybrids and planter/monitor technology, achieving that perfect picket fence corn stand can be a challenge. Mother nature still rules, as does soil variability within a field. Multiple factors affect uniform emergence. They include finding that sweet spot of adequate and uniform temperature and moisture in the seed zone, good seed-to-soil contact and no soil surface crusting.

Corn fields planted in early April, like in 2020, can be at risk of germination or emergence issues due to several rounds of cold soils, according to Purdue University agronomist Bob Nielsen. “In the eastern Corn Belt, for example, I examined an April 7 planted field on April 22 at the Purdue agronomy farm, and it was a long way from emergence because we simply haven’t had accumulated heat units yet,” he says.

One frequent cause of uneven emergence is uneven soil moisture at seeding depth. This can cause corn yield losses. “When 25 to 50% of plants emerge late and lag behind earlier emergers by two leaf stages or more, the delayed emergers fail to develop a full-sized ear or can be totally barren,” Nielsen points out. “Estimates of yield loss would roughly equal that for lower than desired plant populations. When more than 50% of the plants emerge late, then the yield loss more closely resembles expected yield loss for delayed planting. Either way you’re probably looking at not much more than about 10% yield loss due to typical levels of delayed emergence.”

Nielsen reminds growers that the mesocotyl should remain firm, white and healthy through at least the 6-leaf stage. If damaged, mushy or discolored, it’s wise to investigate further.

Seed damage can occur when soil temperatures at planting depth run below 50 degrees F or fluctuate greatly for two days (no-till or heavy residue fields fluctuate less). Chilling injury can occur while the corn seed is imbibing water during the first 24 to 48 hours, damaging cell membranes as the seed expands. In turn, this kills kernels or interferes with seedling growth.

The first root (radicle) begins to appear between 35 and 60 GDD, says Nielsen. “However, once 60 GDD or more have accumulated, then seed that seems to be ‘dormant’ compared to others that exhibit radicle roots, coleoptiles, and lateral seminal roots may well be the result of imbibitional chilling injury.” But you can’t wait too long to investigate for chilling injury or you may misdiagnose it as seed or seedling disease.

Remember that soil temperature impacts seed and seedling growth, because the growing point remains below ground until growth stage V5 to V6.

Uneven seeding depth, or incorrect depth, can impact emergence. Too shallow (½-inch) and the crown of the coleoptile will be close to the soil surface, which exposes early roots to possible damage.

Successful mesocotyl elongation, which varies based on seeding depth, allows the emergence of the first true leaves to occur at or just above the soil surface. Nielsen says that because mesocotyls are thought to be physiologically capable of elongating from at least a 6-inch depth, a 3-inch planting depth (if required to reach moisture) is not a risky choice to consider.

Planting into wet soils often causes furrow sidewall smearing by double-disc planter openers. “Unless you continue to get some timely rains that keep the sidewall moist and soft, these can easily dry rock hard to impact the coleoptile emergence, leading to corkscrewing and leafing out under the soil surface,” he explains. These hard sidewalls can continue to impact the important growing crown roots, trapping them in the furrow.

Wet surface residue when planting in too wet conditions also can cause hair-pinning. Instead of cutting the residue, it gets pushed down into the furrow next to the seed. This eliminates good seed-to-soil contact, resulting in poor or no emergence. Use of properly adjusted trash whippers to move residue away from the planting zone reduces this issue.

Excessive tillage trips, even shallow vertical tillage, can reduce surface soil structure and create surface crusting when hard spring rains happen. The same goes for avoiding excessive down pressure on the closing wheels to avoid compacting soil above the seed.

The highest risk fertilizer application to corn is in-furrow, with broadcast fertilizer being the lowest. To avoid stand loss from in-furrow pop-up, apply no more than 10 pounds per acre of N + K2O regardless of soil texture, recommends Carrie Laboski, University of Wisconsin Extension soil fertility specialist.

Banded starter placed 2x2 (below seed and to the side) offers medium risk if soil conditions also are dry and cold due to the concentrated band not dispersing. “We generally say you shouldn’t exceed more than 80 to 100 pounds per acre of N plus P in the 2x2 starter,” Nielsen points out. To examine maximum safe fertilizer rates by crop, use the decision tool developed by South Dakota State University.

Quality seed treatments on corn have greatly diminished germination and emergence issues caused by insects. “We do see some instances of seed disease or seedling blight, but it’s hit or miss,” Nielsen says. The challenge occurs in a spring like 2020, where an extended germination and seedling time surpasses the two to three weeks of protection against soilborne diseases. As a result, there will likely be a higher risk of seedling disease, he concludes.