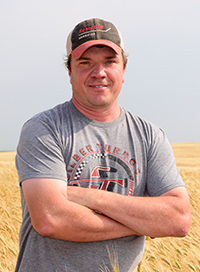 “Both WideARmatch and Pixxaro controlled weeds through crop canopy,” Okerson says. “We got the control that we needed.”

Taking Down Kochia and Buckwheat

In a year that began with very dry conditions, Okerson’s biggest weed issues were kochia and wild buckwheat.

“The effective kochia control we got from both products made harvest easier and more efficient and likely saved us a preharvest pass. When you need to come back and spray a preharvest herbicide to control breakthrough kochia, you are spending an extra $10 per acre or more,” he says.

“This year, because it was so dry this spring, we had more broadleaf issues than grass pressure,” he says. “Both Pixxaro and WideARmatch did a good job with our bigger weeds.”

Often, glyphosate-resistant kochia will escape a burndown application, and a second flush can emerge later in the growing season.

“In this area, we need the higher rate of fluroxypyr to control kochia,” he says. “Kochia is our main weed and sometimes it gets larger than is ideal, and you need that higher rate of active ingredient for control.”

The benefits of WideARmatch, Okerson says, are better kochia control, the flexibility and convenience of a premix, and higher rates of active ingredients. “I was very impressed with the weed control provided by WideARmatch. You don’t see any weeds coming up in the rows,” he says.

An added benefit with WideARmatch, he says, is that you are attacking problem weeds with multiple sites of action. “Arylex active has decent activity on kochia on its own, plus fluroxypyr has activity against kochia,” he says.

“We sprayed when kochia was fairly small, about 3 to 4 inches, and the only place that came back through was where wheat stand was very thin due to drought issues. Otherwise, the treated area stayed clean through harvest,” he says.

The main advantages of Pixxaro EC, as he sees it, are the superior control of kochia, bindweed and wild buckwheat, as well as greater crop rotation flexibility and an economically sustainable price point.

“If you rotate to peas or beans in a really dry year, you can see some carryover with some active ingredients,” Okerson says. “With Pixxaro, however, you can rotate to almost anything.”