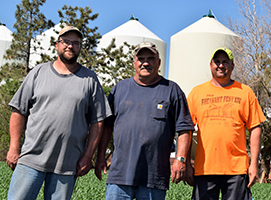 They swapped their herbicide tank mix containing Huskie Complete herbicide to one that includes WideARmatch herbicide.

“WideARmatch killed the kochia and Canada thistle faster. We saw activity almost immediately, and the WideARmatch smokes wormwood on our field edges,” David says. “Control lasts through canopy and should hold us until harvest.”

They made their first in-season herbicide application in early June, about a month after planting, when spray conditions were nearly perfect. “Humidity levels of 70% and temperatures around 70 degrees are ideal spray conditions, and we had that this year,” David says.

“WideARmatch is faster than Huskie Complete,” Steven says. “Visually, we noticed activity against our target weeds one day after application versus a week and a half later with Huskie. WideARmatch goes to work right away.”

“Their need for Canada thistle control drove the switch from Huskie to WideARmatch,” says agronomist Amy Norby with CHS Southwest Grain in Dickinson, North Dakota. “They also switched herbicides to avoid kochia developing resistance. They needed to rotate modes of action, and they needed something to go after Canada thistle.”

“It is important to rotate herbicides with different modes of action to minimize resistance development of kochia,” she says. “Kochia is already resistant to some chemistries, and we need to hold on to every active ingredient that is currently available.”

Steven agrees, saying, “Anything we can do to prevent weeds from going to seed is the best resistance management program there is.”

The fourth- and fifth-generation farmers grow wheat and canola, with a rotation of four years of wheat followed by one year of canola.

“That rotation results in better yields and better weed and disease control, plus the canola root breaks up compaction,” David says. “We farm for moisture to get crops.”

To that end, the family farm, which was established in 1926, transitioned to no-till in the early 1990s, and the Sicklers haven’t looked back. The production practice conserves soil moisture and minimizes erosion.

“We leave about 4 to 6 inches of crop stubble for the snow catch, which helps conserve valuable soil moisture for planting season,” David says. “No-till also decreases our weed pressure, saves us fuel and equipment costs and reduces trips across the field. We cut out a minimum of two trips each season by eliminating tillage.”