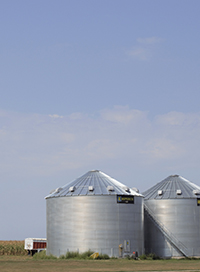 Each year, a multitude of farm deaths are attributed to grain bin-related accidents. Accidents can occur in the blink of an eye, with entrapment often taking only seconds.

Safety should be your No. 1 priority when working in or around grain storage facilities, says Ken Hellevang, North Dakota State University Extension agricultural engineer.

“In the rush of harvest, too many people disregard safety practices and suffer severe injury or death while working around grain. They get trapped in grain or tangled in auger flighting,” he says.

Ideally, when good-quality grain is stored at appropriate moisture levels, there are fewer storage problems that necessitate risky actions in a grain bin. However, if you must enter a grain bin, it is recommended you work in two-person, or preferably three-person, teams with the person entering the bin secured with a lifeline.

If entrapment does occur in a grain storage facility, there are several steps you should take to improve the likelihood of rescue.