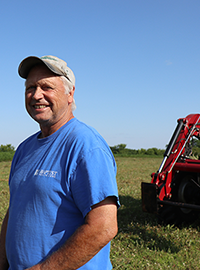 At harvest time, safety is paramount for Joe Larson, who strip farms in Wabasha County, Minnesota. When he recently bought a used hay baler, Larson checked it over. The baler ran fine, but Larson didn’t like the condition of the aged PTO shield. He had it replaced.

In farming, one of the most dangerous occupations in America, safety risks mount during harvest. Machinery accounts for most deaths, followed by motor vehicles and drowning. Falls, followed by animals and machinery/vehicles account for most non-fatal injuries. Nearly a third of agricultural injuries involve youths.

“Harvest time is when we see the highest number of accidents,” said Jerry Minor, fire chief in Pittsville, a rural community in Wood County, Wisconsin.

Following these four tips can help increase the likelihood of a safe harvest season.

“There are multiple reasons for that and probably the biggest one is weather,” Minor said. “It's the same people working longer hours; the harvest needs to get done. If it's predicted that tomorrow, we're going to have two days of rain, well, today, we are going to work until the moon comes up and after to get that crop off. We're more tired. Reaction time is less. So, when we get in trouble, let's say we have corn stalks caught in a picker, we take shortcuts. And when we take shortcuts, accidents happen.”

Minor estimates nine out of 10 incidents involve farmers in a hurry. Workers’ unfamiliarity with equipment, along with missing shields and guards, account for many others.

“You start to make tradeoffs between productivity and quality and safety -- oftentimes, you can't get all three and safety gets left out,” said Judd Michael, Nationwide Insurance Professor of Ag Safety and Health at Penn State.

Minor estimates nine out of 10 incidents involve farmers in a hurry.

“What we often see in the statistics is that there's some misjudgment by a farmer or farm employees that causes the accident. And misjudgment often comes from being tired or pressured; we're working long days to get the harvest in. All these external factors can lead to poor judgment by an employee, and that leads to injuries or fatalities.”

2. Shut Down Equipment Before Working on It

Growing up on a century farm in Mazeppa, Larson heeded the safety advice of his late father, Roger Larson. Joe’s had uncles lose a right arm to a silo filler and a finger in a corn picker, and two neighbors lost several fingers.

In the field, everything was working fine until the head stopped turning. He got off and saw that part of the machine was not running. A belt looked loose. “So, I pulled up on the belt, and when I pulled up on the belt, it takes my hand over a flat pulley. I immediately shut everything down, and I threw up. And it scared me a lot. I think that moment kept me alive through the years because I was more cautious.”

Larson urges farmers to shut off machinery before working on it, or if you must have it running, stand back. Don’t wear clothing that can entangle or if caught, not rip off.

“If a farmer goes out to a field and needs to drop an empty wagon at one end and pick up a full wagon at the other, it is so much faster for two people to go together,” said Melissa Ploeckelman, outreach specialist at Marshfield Clinic’s National Farm Medicine Center (NFMC).

“One person drives while the other hitches the wagons. Too often, they both jump on one tractor, with one riding on the fender. It is a culture that we see. It's faster, but it's not safer.”

Larson urges farmers to shut off machinery before working on it, or if you must have it running, stand back. Don’t wear clothing that can entangle or if caught, not rip off.

Take five minutes to walk across a field, or park a second vehicle nearby, she said, rather than risk shutting down your harvest due to an injury or death when someone falls off the tractor. “Stop before you jump on the tractor and ride along,” she urged.

“It's easy to grab a PTO shield and step over the top,” she added. “And one time, if that guard doesn't work on the PTO, someone could get wrapped up in seconds. It takes a split second for you to make a mistake that can last a lifetime.”

On the roads, use proper lights and slow-moving vehicle signs. Larson also warns his workers to gear down, for example, when driving downhill on the rolling countryside around his farm.

Never enter bins when unloading corn or breaking up a mass. Kernels can form a crust that you can fall through and suffocate. If the flow plugs during filling, shut down and lock the filler with a padlock, attaching a tag signed by the person going inside. Use a safety harness and a second person, Ploeckelman said.

Marshfield experts see incidents with thinking like this: “It's only going to take me three minutes, I've done it 100 times” and the person jumps in, she said. “And that's the time that it's going to happen -- when he or she is not prepared. They don't have a second person. They don't have their personal protective equipment on; they didn't lockout/tagout. And they get sucked in.”