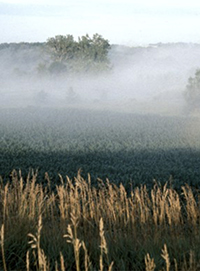 Clear and calm weather conditions don't automatically mean it's a safe time to spray, especially when applying herbicides. Instead, those conditions could be setting up the perfect scenario for an air temperature inversion.

What is an Air Temperature Inversion?

Inversions occur when a cool, stable air mass is trapped near the ground and can suspend particles within it — such as herbicide particles. If herbicides are applied during a temperature inversion, the solution may hang in the air and move off-target, damaging susceptible crops and plants.

“The first thing to know is that air temperature inversions happen daily.

They almost always start three to four hours before sunset and then fall apart one to two hours after sunrise,” he says.

Air density decreases with increasing height (altitude) during an inversion. This causes a density stratification of the air—with the coolest, densest or heaviest air near the surface. The result is air and spray droplets only moving horizontally within the inversion.

The second thing to watch is wind speed. “Generally speaking, when winds are three miles per hour or less, there’s an extraordinarily high certainty that an inversion will occur during these hours,” Thostenson says. “Given the right circumstances, we’ve seen inversion-caused drift problems in winds up to six miles per hour.”

With very little wind and heavy air, spray molecules become suspended and held, slowing their rate of descent and increasing lateral movement. When that happens, it can cause damage when it moves off-target to a susceptible plant.

“Contrarily, when we think about volatility where we have a pesticide gas molecule that is coming off foliage or coming off the soil, the gas molecule is not trapped in the cool air layer. It's held there because of the friction or density of the air, so it doesn't dissipate,” Thostenson says.

Early morning visual clues, like ground (radiation) fog that hasn’t dissipated or dust that lingers from driving down the gravel road, are cues that the air temperature inversion hasn’t departed yet. “You can also use a smoke bomb. If the smoke stays close to the ground, you must wait to spray until after the inversion is gone,” he says.

“Applicators get into much more trouble with late afternoon and evening inversions if they’re not watching for development. If you see dust from your tires hanging low in the field or from gravel road traffic, it’s time to stop spraying,” Thostenson adds. “Temperature inversions happen more easily when skies are clear to partly cloudy in the afternoon; more slowly if conditions are overcast.”

Geography also plays a role in the frequency and severity of air temperature inversions. “Inversions are often more intense in southern and mid-South states because they don't have as much wind velocity compared to other portions of the Corn Belt,” Thostenson says. “In our prairie environment of North Dakota, there isn't anything to slow or moderate the wind. We get inversions, but not as intense as they do down in the mid-South.”

Switching to spray nozzles that produce coarser, heavier droplets instead of fine, driftable droplets can help, but this may reduce control of weeds. “For example, paraquat works much better with medium or fine-textured spray drops. You can't always rely on spray droplet size to prevent potential off-target problems. Always check the label,” he adds.

Thostenson says the best advice is to plan your spray days. Planning is the real key to managing for air temperature inversions:

If you’re going to spray tomorrow, check the weather forecast for the next 24 hours.

If you see wind speeds are five miles per hour or less with a lot of sunshine, I’d be much more concerned about air temperature inversions tomorrow morning.

To learn more about inversions to help you decide if a spray application should be made, read this NDSU publication: “Air Temperature Inversions Causes, Characteristics and Potential Effects on Pesticide Spray Drift.”