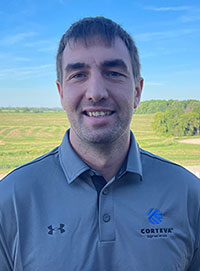 When Cody Lerch was a young college student, he spent his summers helping out on his then-girlfriend Kirstin’s family farm in Clermont, Iowa. Today, that family farm is known as Trigen Partnership, and Cody and Kirstin run the operation.

“My wife and I came back in 2014. So, this will be our seventh growing season,” Cody says. “She is the third consecutive generation running the farm.”

Cody and Kirstin work with Kirstin’s father, as well as about a dozen full-time and about a half-dozen part-time employees. They grow roughly 2,000 acres of soybeans and 3,000 acres of corn, using Pioneer® brand seed. They also run a farrow-to-finish hog operation with about 1,400 sows and as many as 30,000 finisher hogs each year.

And if that wasn’t enough to keep the couple busy, they have four children: three girls and one boy, ages 1 to 7 years old. It all might sound like a lot, but Cody says the constant activity keeps life interesting.

“I like being able to be outside and planting corn or beans one day, taking care of the pigs one day and spraying one day. It’s nice to have a little variety. It leads to more headaches, but it keeps things exciting too,” he explains.

"I like being able to be outside and planting corn or beans one day, taking care of the pigs one and spraying one day. It's nice to have a little variety."

A Day in the Life of Cody Lerch

It’s a good thing Cody likes variety, because he gets a lot of it day to day, especially in the month of June. He says he and Kirstin typically are up and going by about 6 a.m. Although, they don’t always get the choice. “Right now, it kind of depends on when the kids get up,” he says.

Once the kids are taken care of, the chores begin. Cody says the first priority, when it comes to work on the farm, is the pigs. With thousands of animals to care for at any given time, the word “chore” certainly fits, “making sure everyone has food and water and that there are no major issues that need my attention,” he says.

After attending to the animals, the field work begins for Cody. Depending on the exact day, he says they could be spraying their corn or soybeans or selling a load of hogs before lunch.

And speaking of lunch, a sit-down break is not always an option this time of year. “Some days it’s eating while you’re in the tractor or the sprayer, eating a sandwich quick while you’re filling the planter. But most of the year, we try to make sure the employees get an actual lunch break,” Cody explains.

After lunch, Cody will continue with spraying if necessary. Depending on the season, it might be time for postemergence applications. When it comes to protecting his corn postemergence, he uses Realm® Q herbicide from Corteva Agriscience. The solution can be applied on up to 20-inch-tall corn.

Sometimes other work needs to be done, like sweeping out grain bins or hauling grain to the river or ethanol plant. Cody says if there’s a little bit of downtime, he’ll even start prepping his harvest equipment. “I know June seems kind of early to be doing that, but it takes a while and some of that stuff creeps up on you,” he says.

Like for most farmers, Cody’s work is never truly done, particularly in-season. “It really depends. The last couple growing seasons, it’s been almost working 24/7 with the corn planter and the bean planter, making sure you’re getting the seed in the ground,” he explains.

Cody tells us it can get stressful, but he says the little things get him through the long days.

“A lot of caffeine! No, what’s really nice is that the kids will come out after school and see us wherever we’re working and that’s a great break. They’ll ride along for a little while and that resets everything and reenergizes you a little bit,” Cody says. “And then we’ve got some really good part-time help that comes in after work, and that’s a jolt in the arm when you have guys who are excited to be on the farm. That keeps you going too.”

"What’s really nice is that the kids will come out after school and see us wherever we’re working and that’s a great break."

Advice From a Fellow Corn Farmer

Cody tells us he loves his life as a farmer, but he admits it comes with concerns. Like many of his peers, he worries about things like weather and the constant roller coaster of commodity prices. But, in his position, Cody also worries about how his operation is perceived.

“And there’s a lot of misconceptions from people outside of agriculture as to what a third-generation family farm is really all about. The first thing that comes to mind is that it’s a big corporation or a factory farm. We’re not that. We’re an actual family farm,” he explains.

Cody says, while he and Kirstin do employ other people, they’re in the fields day after day doing the work as well. And since Cody wasn’t raised on a farm, he’s been learning quite a lot on the job.

“The biggest thing that I’ve learned in my short years of farming is to not skimp on things. You need to make sure that you’re doing things like soil sampling, making sure your nutrients are where they need to be and getting the seed in the ground in a timely manner and into a good environment where it can grow. Otherwise, you’re not going to be very happy with the results,” he says.

Cody always aims to grow a good yield. He says he’s constantly learning, trying new techniques and technologies to grow more bushels, but he says the best piece of advice he’s gotten is from his father-in-law. Early planting can lead to higher yield.

“My father-in-law has always been a big proponent of getting the seed in the ground early. He’s always pushing, wants to know when the planter’s going to start going. He says it’s better to get it in the ground, because it’s not going to grow in the box,” Cody explains

“My father-in-law has always been a big proponent of getting the seed in the ground early...He says it’s better to get it in the ground, because it’s not going to grow in the box."

And growing is Cody’s job: growing yield, growing a business, growing a family and growing his own skills. Maybe one day Trigen will move on to the fourth generation, but, for now, Cody says he’s really enjoying the work — and the learning process.

Pioneer® brand products are provided subject to the terms and conditions of purchase which are part of the labeling and purchase documents. ™ ® Trademarks of Corteva Agriscience and its affiliated companies. Realm® Q is not registered for sale or use in all states. Contact your state pesticide regulatory agency to see if a product is registered for sale or use in your state. Always read and follow label directions.