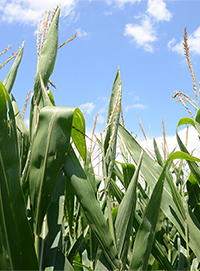 Nitrogen: it's the key macronutrient for crop production. And farmers give it plenty of attention, but what form are you using, and does that matter? Here's a look at key forms on nitrogen farmers are using today.

This is the water soluble form of nitrogen, which makes it readily available to plants, but also more mobile. This is the form that can seep below the rootzone before your corn plant can take it up to put it to use. This mobile form of nitrogen can also be blamed for nitrogen seeping into ground water.

Nitrate is also mobile because it has the same electric charge as soil – negative – so technically it is 'repelled' by soil.

Ammonia is a gas at atmospheric pressure, but it can be compressed, creating anhydrous ammonia in liquid form. When you apply anhydrous the ammonia reacts with water in the soil and changes to the ammonium form.

Ammonium nitrogen is water soluble, but it attaches easily to soil particles because ammonium is positively charged while soil is negatively charged. This keeps it from leaching away. But during the growing season soil organisms convert the ammonium to the nitrate form, which is the main form taken up by plants.

"Most plants will take up ammonium and nitrate equally as well," says James Camberato, Extension soil fertility specialist, Purdue University. "There is some advantage to nitrate because of its mobility."

He notes that having ammonium in the soil, which is less mobile, is a moot point since those soil microbes change it to the more mobile nitrate form relatively easily. Nitrification inhibitors limit that microbial activity, slowing that ammonium-to-nitrate transition to help keep nitrogen available to your crop longer.

The anhydrous ammonia nitrogen source does have some safety concerns, but it is often the lowest cost form on nitrogen which makes it more commonly used. "It is pure ammonia with no nitrate component to it, so it takes longer to convert to nitrate, the leachable form," says Michael Moechnig, field scientist, Corteva Agriscience.

This is often a dry source of fertilizer applied on top of the ground, but to become available nitrogen it must go through a multi-step change. That first step is a conversion to ammonia N, which is volatile in the air. Camberato estimates that this process happens in just a few days after application and if left undisturbed as much as 30% of the ammonia form of N can be lost when conditions are conducive to loss.

"Urea can raise the pH which maintains the ammonia form and it goes into the air as gas," he points out. "This can be a problem in a no-till system in particular."

However incorporating urea soon after application can get it into the soil where it will transition from ammonia to ammonium and later to the nitrate form (thanks to those handy soil microorganisms).

Moechnig notes that UAN can be applied with preemergence herbicides and in other formulations in-season, making it more convenient to use. "But you can lose up to 25% of the N if it's not incorporated," he adds.

The key crop-available forms of nitrogen are ammonium and nitrate, no matter how it starts before it hits the ground. And interestingly, when nitrate nitrogen enters the crop, it is converted back to an ammonium form, which Camberato explains. "The nitrate has to be chemically reduced to an ammoniacal form of nitrogen, but it is incorporated into carbon molecules; the plant does not accumulate ammonium in the cell, or it would become toxic."

Nitrogen from the air?

There's a new way to deliver nitrogen to corn plants. Different methods work to stimulate the corn plant to produce its own nitrogen or gather nitrogen for the plant to use. These bioprocesses are relatively new to the market and Camberato is somewhat skeptical for now. "I like to see 20 or 30 experiments before I make a decision," he says.

And this developing area of science is still maturing, but it offers the promise to provide the individual plant a certain number of N units throughout the growing season without the potential to leach.

Corteva is testing Utrisha™ N nutrient efficiency optimizer, a microbe-based nitrogen fixation product. "This is a bacteria product you spray onto the crop leaf surface and it enters through the stomata and colonizes in the leaves," Corteva's Moechnig explains. "The bacteria feeds off the methane byproduct in the leaves, and it produces nitrogen from those byproducts."

The bacteria is capturing atmospheric nitrogen and splitting it to make ammonium in the plant.

Moechnig is testing the product and reports that Corteva will be launching it in 2022. But how might it benefit the crop?

"This year in dry areas, farmers are reluctant to sidedress nitrogen, due to the risk of volatility loss. This is another way to put on nitrogen later in the season," Moechnig says.

Newer corn hybrids bred for higher yield are changing their nitrogen needs so more is needed at grain fill. Camberato says it's more of an evolutionary change, rising from 30% to 35% over the years. But this also shows that more than one-third of the nitrogen that plant needs is after flowering during the final reproductive stages, not early on.

Moechnig explains Utrisha™ N is designed to be with the plant at that time. It can be applied earlier, and the bacteria keeps production into higher leaves. And the product may have a benefit in soybeans.

Knowing the forms of nitrogen you're using, and how to maximize them is getting more important as prices rise. And rising concerns about nitrate leaching means better understanding timing and release of the specific form of nitrogen you choose. Consult with your crop adviser for options to fine-tune nitrogen use for the best return on investment.

Instinct NXTGEN® and Utrisha N nutrient efficiency optimizer are not registered for sale or use in all states. Contact your state pesticide regulatory agency to determine if a product is registered for sale or use in your state. Do not fall-apply anhydrous ammonia south of Highway 16 in the state of Illinois. Always read and follow label directions.