Consumers may believe that sunlight, water and healthy soil compose the backbone of a successful corn harvest. However, as a farmer, you understand the importance of a fourth component: nitrogen.

Without nitrogen, the production of essential amino acids, proteins and nucleic acids falters, which negatively impacts growth and yield from one year to the next. However, understanding the nitrogen life cycle and solutions that can offset causes of nitrogen loss is a great start to ensure you’re doing everything you can to get the most out of your acres.

The conversion of nitrogen gas from the atmosphere into a plant-usable form is known as nitrogen fixation. The fixed nitrogen is then carried to other parts of the plant to form and strengthen tissues.

Corn uses nitrogen in two forms: ammonium (NH4+) and nitrate (NO3-). But it prefers ammonium, because that form is easier for the plant to absorb and less susceptible to loss. Fixing nitrogen from the atmosphere and converting it to ammonium can significantly improve plant vitality for a healthy harvest. That’s why Corteva Agriscience encourages the use of Utrisha® N nutrient efficiency optimizer, a biological product that converts atmospheric nitrogen to ammonium. That conversion optimizes your nitrogen supply and use efficiency for improved yield potential.

The second stage of the nitrogen life cycle, mineralization, takes place in the soil. Throughout this stage, microbes convert organic material (e.g., manure, decomposing plants or animal material) to a form of nitrogen plants can use. This process produces ammonia, which then reacts with water to form ammonium. Ammonium produced in the soil may supplement the development of crops, but often does not provide all the nitrogen necessary for optimal crop productivity.

After urea or ammonia from fertilizers is converted to ammonium in the soil, nitrification converts it into nitrite (NO2−) compounds. From there, bacteria (Nitrosomonas) work in oxygenated soil to turn nitrites into nitrates, which is a form of nitrogen that does not adhere to soil particles and can move with soil water.  However, ammonium is not mobile in the soil because the positively charged ammonium molecules are attracted to the negatively charged soil particles.

Nitrate can leak out of the soil when it becomes dissolved in water. This process, known as leaching, can potentially pollute waterways and aquifers. N-Serve® and Instinct® NXTGEN nitrogen stabilizers from Corteva Agriscience help you combat leaching by slowing down the bacteria that converts ammonium to nitrate, keeping nitrogen in the ammonium form longer — keeping nitrogen close to the plant roots.

Put simply, immobilization stores nitrogen in microorganisms. This can cause a temporary loss of nitrogen if plant residues in the soil cause microbial populations to build and consume the nitrogen that was provided by fertilizers. However, some of the nitrogen may eventually return to the soil when the microbes die and decompose. 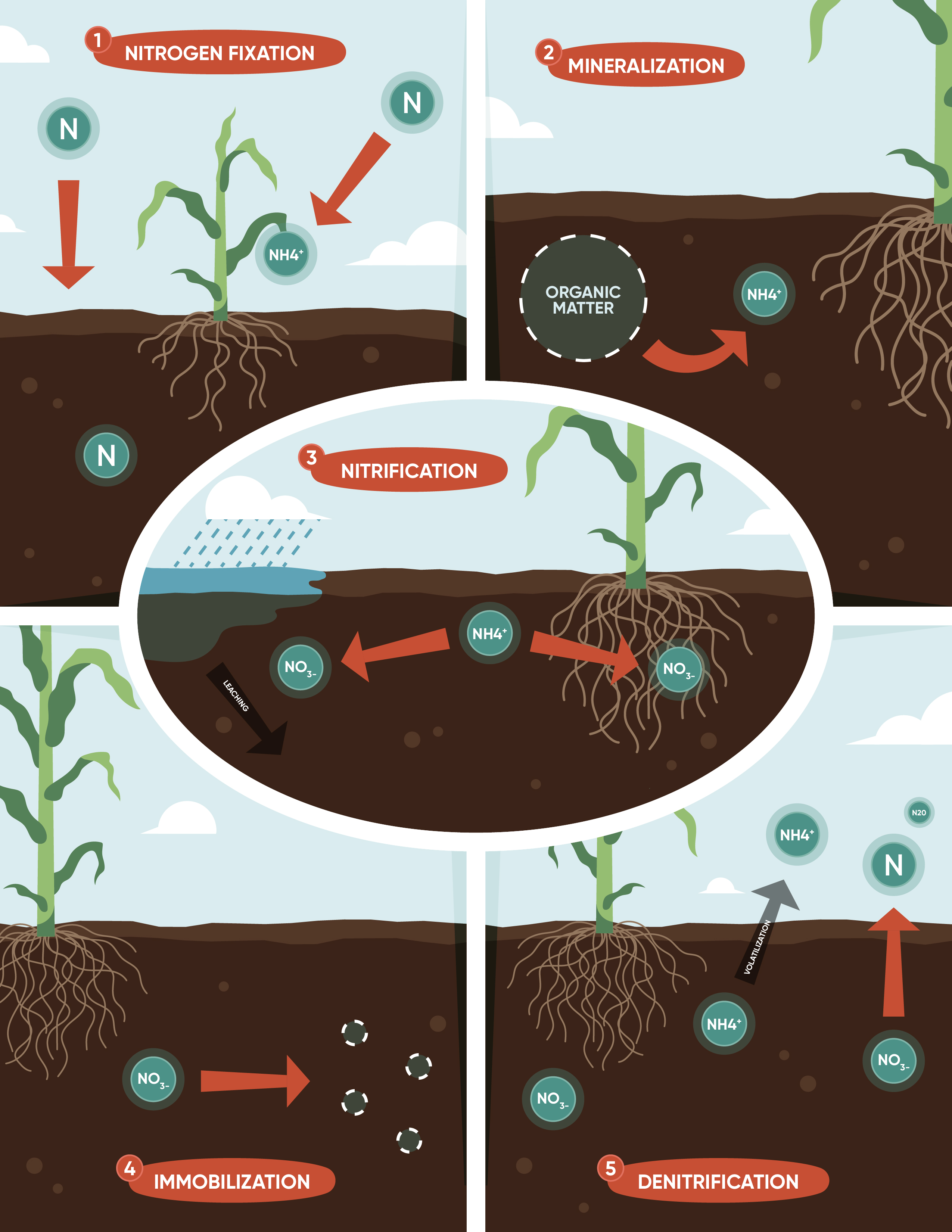 Download a copy of the nitrogen life cycle here.

Urea and urea ammonium nitrate (UAN) are effective fertilizers that can supplement nitrogen supplies and soil fertility. However, volatilization, which occurs when ammonium is converted to ammonia gas and released into the atmosphere, can cause significant nitrogen losses when these fertilizers are applied on the soil surface. That’s why Corteva Agriscience offers PinnitMax® TG nitrogen stabilizer.

Designed for compatibility with existing fertilizer equipment, PinnitMax TG works above ground to offset the effects of volatilization and help applied nitrogen get to the root zone. When used with fall, spring or sidedress applications, PinnitMax TG can effectively protect urea and UAN from loss for up to 14 days, maximizing your yield potential.

Learn more about the solutions available to improve nitrogen availability throughout the growing season by visiting NutrientMaximizers.com.