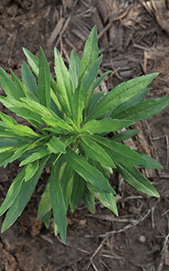 If a good crop of winter annual weeds often takes root in your fields, you're in good company. When harvest is wet, growers are able to make fewer fall herbicide applications.

For corn fields, rotated from soybeans, watch for herbicide-resistant marestail (horseweed), field pennycress, henbit, downy brome, chickweed, mustards, prickly lettuce, shepherd’s purse, dandelion and more, depending on your area. If your field is no-till, weed species and weed size may vary. Some no-tillers are reducing weed issues with a good spring cover crop.

To reduce the impact of winter annual weeds (and early spring weeds) on early corn growth, make burndown applications of residual herbicides before planting. (Keep in mind burndown herbicides and residual herbicides are not always the same.) This helps achieve a clean field prior to seeding, as these weeds that are flowering or showing stem elongation are more difficult to control while consuming soil moisture. 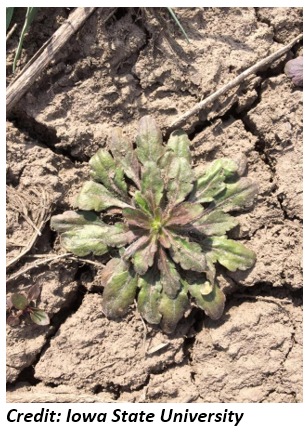 Hager and his colleagues announced a finding last year of waterhemp with Group 15 resistance (which includes acetochlor, dimethenamid, pyroxasulfone, and metolachlor). Such rapid metabolism by the weed is the same mechanism used by corn plants to survive Group 15 herbicides. This announcement was followed by reports of 2,4-D resistance in waterhemp in Illinois, Nebraska, and Missouri, (each of these states reported 2,4-D resistance prior to confirmation of Group 15 resistance) and in Palmer Amaranth in Arkansas and Kansas. And the Kansas Palmer amaranth population was also resistant to dicamba. All these cases are believed to be due to the weeds’ enhanced ability to degrade the herbicides.

Metabolism-based resistance (MBR) is different from target-site resistance (most common for Group 1, 2, 5 and 14 herbicides). MBR is non-target site resistance, which allows the herbicide to be detoxified before reaching the target site—posing unique threats compared to other resistance mechanisms.