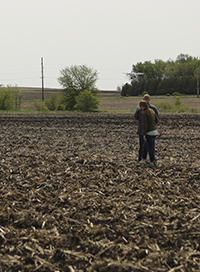 Late winter is always an exciting time of year, because it means spring is right around the corner. And once spring arrives, all the hopes for a new corn-growing season are put into action. It's important to prepare for the season with a solid corn weed control plan.

“Farmers: We’re all eternal optimists. We like to think we’re going to have the best season ever. I think, from a management standpoint, farmers feel a lot better about what they did in the fall of 2020 from a preparation standpoint than they did in 2019,” says LeVan.

Both LeVan and Geis work in Iowa and say, for the most part, corn farmers are starting 2021 on the right foot. Fall weather allowed for a lot of important applications and for work to get done and pave the way for spring. Now is the time for you to make sure your plans for planting and, of course, weed control are ready.

Geis and LeVan advise controlling weeds “early and often” to ensure corn has the best possible chance for a high yield. You want to eliminate the competition for nutrients, water and sunlight to allow young plants to develop large, full ears.

“V5 to about V10 is about two weeks and that is a very critical weed-free period. It you do everything else right, but you don’t get your weed control spot on, your yield will suffer,” LeVan says. “Having some flexibility built into your plan. That’s key. Farmers who aren’t nimble anymore, they struggle.”

Geis says one good way to stay nimble is to build a complete weed control program approach, “The best plan year in and year out is to plan for a two-pass application program.”

He says those residual herbicides can help kill weeds while they’re still seeds, which takes a lot less than it does to bring down a full-grown weed. “I think that speaks to why using a good preemergence and postemergence residual gives us so much more bang for our buck.”

When it comes to flexibility, Geis and LeVan aren’t just talking about your weed control plans themselves. They’re talking about the actual solutions. If you can, you’ll want to choose products that offer flexible application windows.

“When I talk about being nimble, being flexible and having a Plan B, C and D, it’s nice to have that in your back pocket,” LeVan says.

If, for example, this spring is rainy and you can’t get your preemergence on preplant, it’s nice to have a solution on hand such as Resicore® herbicide, which you can apply on corn up to 11 inches tall.

Having some leeway to apply herbicides safely can keep minor inconveniences from becoming major setbacks later in the season.

And while you’re thinking of the solutions you want in your weed control program, don’t forget to think about the problems themselves: The weeds. Which weeds are likely to give you the most trouble this spring?

“In Iowa, the concerns for weeds are the big three: waterhemp, giant ragweed and marestail. And I would say, woolly cupgrass is one that’s coming back,” LeVan explains.

“I would agree,” Geis adds.

LeVan continues, “Woolly cupgrass isn’t hard to control. Farmers just sometimes forget about it. This is a quick reminder, because it can get very high pressure very quickly.”

Sometimes growers get tunnel vision and only think about controlling the most difficult weeds, leaving sneakier ones to flourish and cause headaches. So, both LeVan and Geis advise you to consider the whole weed spectrum: broadleaves and grasses when planning ahead.

For woolly cupgrass specifically, Geis says it’s “hard to control with residuals. So, if we’re doing our due diligence to get our broadleaf chemicals out timely, that’s all early and then cupgrass sneaks in later.”

That’s just one example of a second pass being integral to control yield-limiting weeds. Geis advises including glyphosate to help keep woolly cupgrass at bay.

At the end of the day, both LeVan and Geis say to stay optimistic about 2021 but to hope for the best and plan for the worst. They say the best way to prepare is to have targeted plans in place for a flexible, two-pass program.

“Two-pass programs help insulate against unfavorable weather. You’re taking at least two shots at the weeds. In a one-pass program, if something goes wrong, you can end up in a disastrous situation,” Geis says.

And you don’t have to make those plans alone, because there are resources to help you at every step of the way. You can always reach out to your Corteva Agriscience territory manager or your Pioneer agronomist with questions.

You can also turn to technology for assistance. Find the right crop protection solutions for your farm online, and then download the Pioneer Seeds App to access tools that can estimate yield, identify threats, connect you with experts and more.

Pioneer® brand products are provided subject to the terms and conditions of purchase which are part of the labeling and purchase documents. ™ Resicore® is not registered for sale or use in all states. Resicore is not available for sale, distribution or use in Nassau and Suffolk counties in the state of New York. Contact your state pesticide regulatory agency to determine if a product is registered for sale or use in your state. Always read and follow label directions.