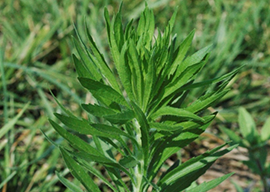 In recent seasons, farmers have seen marestail numbers increase as cool, wet fall conditions in many areas have served to provide ample fuel for it and other winter annuals to germinate. When marestail germinates in fall and is allowed to overwinter to spring, it is generally considered the most difficult weed to control. Once it gets a hold in a field, marestail can significantly decrease yield, too.

Here are some key characteristics of marestail that make it one of corn farmers’ biggest headaches, as well as recommendations on how best to control it:

A single marestail plant can produce upward of 200,000 seeds, so it only takes a couple of seasons for it to take over a field. Also, those seeds are easily dispersed to neighboring fields or even nearby states via wind.

Marestail has documented resistance to these multiple modes of action, making it more difficult to control, especially in burndown or postemergence applications. According to WeedScience.org, herbicide-resistant marestail is already present in nine U.S. states, including South Dakota, Kansas and Iowa, and the list is growing.

Marestail can emerge in either the spring or the fall, giving it ample opportunity to go to seed. If allowed to germinate in the fall, seedlings in very high percentages can overwinter as a small rosette and then bolt once spring comes. When this happens, marestail will grow rapidly — up to 6 feet tall — as temperatures warm, robbing soil of two critical inputs for production: moisture and nitrogen. But it can also emerge in late spring or early summer and is even tolerant to drought conditions, meaning it will work to outcompete corn for critical moisture.

How to treat marestail

Preventing marestail from going to seed and establishing a seedbank in your soil is key to management. That makes scouting before or immediately after harvest critical, so you can develop a weed control plan using fall or spring herbicides. Some effective treatment recommendations include: