While every year and every field produces different results, the difference-maker for continued improvement in corn emergence involves spending time in fields, digging plants and taking notes. 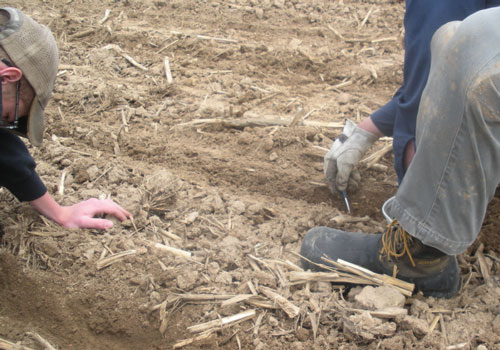 “May hit with cold temperatures, and we saw specific micro-environment impacts of where the seed was placed in the ground, and how quickly the seedbed dried out,” she says. “A dry seedbed won’t allow much buffering to protect the seed and seedling against temperature swings.”

Rees and her colleagues noted corn that emerged earlier and more uniformly occurred where planting strips were consistently free of residue, compared to row areas where residue blew back over parts of the strips. The difference in temperature and moisture drove better emergence.

Another observation of uneven emergence was caused by planter settings and soil variability, reducing seed-to-soil contact. “Seeding depth variation within the row caused some seed to be planted in drier soil, slowing germination and emergence among plants. Some of that depth variation could be attributed to softer seedbed conditions in strip-till fields,” Rees adds. The cooler soils in no-till and fields planted into cover crop also showed emergence delays.

The negative impact on yields if weeds are allowed to compete with young corn plants is well documented in research across the Corn Belt. The baseline recommendation is to remove all weeds before they reach four inches tall and rob the crop of water and nutrients.

“Weed control is an important part of reducing competition with early emerging corn,” Rees says. “Many of our growers utilize burndown applications and preemergence herbicides with residual to keep weeds in check.”

When calculating, since GDDs are based on air temperature not soil, adjustments to GDDs occur based on management and environment. Here is one tool to help track GDDs.

Due to the many variables that can impact corn emergence in any given year, it’s wise to dig and take notes to find patterns that can improve every field.