There are nearly two dozen common soybean diseases with which North American producers must contend. And given that some of these diseases, like sudden death syndrome, can result in a 40% yield loss, it’s critical for growers to take steps to prevent and control them.

While regular field scouting can help you track early emergence of soybean disease, your best defense is knowing what seed treatments and fungicides to employ as well as when to plant and treat crops.

What you need to know about soybean disease prevention

While it’s rare for soybean diseases to decimate entire fields, they can cause dramatic drops in yields. Prevention is critical. “You want to make sure those seedlings come up evenly without vegetation being affected when the seed is coming out of the ground or right after emergence,” says Nathan Wyss, market development specialist in Indiana-Eastern Illinois for Corteva Agriscience.

Not only do you want to have the most consistent emergence possible, according to Wyss, but you also want to keep your soybean fields uniform throughout the growing season. “The more difference in plant emergence and growth, the lower your yields,” Wyss explains.

Plus, disease stress leaves potential for spots of your field to be bare—which not only impacts field productivity, but also creates the potential for greater weed pressure in your field due to the lack of a consistent soybean canopy.

While there are dozens of soybean diseases that can appear throughout the growing season, from early development in the roots to striking when the plant is at full canopy, there are a few common and widespread diseases you should be proactive in preventing, scouting for, and treating.

Seedling and root diseases, also known as soilborne diseases, are the result of pathogens, like fungi and nematodes, that live in your soil. They can cause rot in seeds, seedlings, roots, and stems and may occur early in the growing season or even all season long, depending on the disease type and your geographic location. 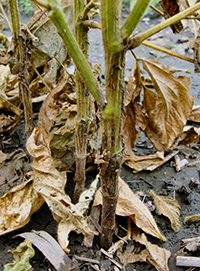 Among the most common seedling and root diseases, according to Pioneer Field Agronomist Ryan Van Roekel, Ph.D., are Fusarium, Phytophthora, Pythium, and Rhizoctonia. “Most are found nationwide,” he says, and if you have them, they won’t necessarily exhibit throughout your fields. “You might have hot spots, including hot spots within fields,” Van Roekel adds. Digital farming tools, like Granular Insights Directed Scouting, can help you identify those hot spots by monitoring your field with satellite imagery and regularly alerting you to low health spots that you should prioritize for scouting.

Each of these four types of root and stem rot thrive in varying conditions. Pythium likes soil that is wet and cold, for example, while Fusarium prefers hot and dry soil. Only in extreme cases will root and seedling diseases kill your plants—but Van Roekel cautions they can rob your yields.

The best way to avoid having sections of fields fall victim to soilborne diseases is to try and prevent the diseases in the first place. Most soybeans sold today have seed treatments that prevent disease development. “Focus on seed treatment with fungicide,” advises Wyss. It’s not worth it, he says, to skimp on seed treatments to save costs; you’ll pay for it down the road with reduced yields.

The most common remedies for soilborne diseases like Phytophthora are either metalaxyl or mefenoxam. However,  Corteva offers Lumisena® fungicide seed treatment, a biofungicide that inhibits growth of seedling and root pathogens while also increasing the plants’ nutrient uptake by fostering healthier root development and sites for nodulations.

White mold is among the most common and widespread of soybean stem diseases. It typically shows up as a white, fluffy growth at the beginning of the plant’s reproductive cycle in R1, right at flowering. White mold thrives in warm, wet, and humid conditions, according to Van Roekel. It shows up as “a big white mold up and down the stem” and is more common in the upper Midwest. Rain, cool temperatures, and high humidity present perfect conditions for white mold.

Another common root and stem disease is sudden death syndrome (SDS), which exhibits exactly as its name suggests. “You'll just have big patches of field late in the year that suddenly die,” Van Roekel says. Caused by a Fusarium fungus, it infects soybeans early in their lives, moving from roots into the lower stem.

A cold, wet spring encourages development of sudden death syndrome in seedlings, and if you experience a wet summer, the disease can overpower your plants.

You can control white mold with an early application of a fungicide like Aproach®. Aproach is especially useful if weather or other contingencies prevent precise timing of application, as it offers both preventative and curative properties.

Wyss says you should make multiple applications of Aproach for the best control—a preventative application at R1, another at 100% bloom, and then a third 10-14 days later. There are no preventative seed treatments for white mold.

When it comes to sudden death syndrome, prevention and control have long been a struggle. “In the past, genetics were the only defense.” says Van Roekel. “Pioneer has been industry-leading in genetic resistance for SDS, but we still see a great benefit to adding ILEVO seed treatment."

A bonus of ILEVO, according to Van Roekel, is that it also protects against soybean cyst nematodes (SCN). You might also consider planting soybeans with the Peking source of resistance, which can help reduce the plants’ vulnerability to SCN. Plants infected with SCN are especially susceptible to severe impacts from SDS. 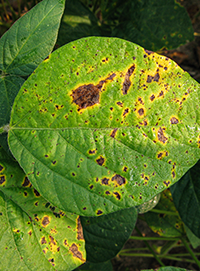 Soybeans are vulnerable to a variety of leaf diseases, and their emergence can begin pretty early in the plants’ vegetative stages. Among early emergents is Septoria brown spot, which exhibits as little brown spots at the bottom of the canopy where leaves will start turning yellow and then gradually develop brown spots. If left untreated, Van Roekel says, Septoria brown spot will just keep moving higher in the plant. “While many producers don’t worry about it,” he adds, “it can impact yield potential.”

Frogeye leaf spot is another common soybean leaf disease that typically emerges on the upper part of the plant canopy later in the growing season. There are no seed treatments for it. Frogeye leaf spot exhibits as a light-colored spot with a dark ring. According to Van Roekel, Frogeye leaf spot is most common in the mid-South and Southeast, though he has seen it moving north. “It can get on pods and start affecting seed quality, as well as yield,” Van Roekel warns.

Another late emerging leaf disease is Cercospora leaf blight, which shows up at the top of the plant’s canopy with purple leathery leaves. It also can stain seeds purple.

The best control for Septoria brown spot is to apply fungicide starting at the pod stage.

Frogeye leaf spot has shown resistance to strobilurin fungicides, which have been used in fields for decades. Thus, a multiple mode of action foliar fungicide like Aproach® Prima works best, especially if applied preventatively before lesion development. Given that Frogeye leaf spot can reduce field yields by as much as 40% in the right conditions, it’s not a disease you should ignore.

“A properly timed fungicide application will prevent Frogeye leaf spot to begin with,” says Wyss, “but Prima has preventative and treatment qualities.”

Cercospora leaf blight, meanwhile, is far less responsive to fungicide and has become increasingly difficult to control, according to Van Roekel. “While traditionally a Southern disease,” he says, “we see it moving north every year.”

Tips for scouting your field and heading off disease

In order to entirely control soybean disease (without taking advantage of preventative seed treatments), you’d have to be in your fields scouting all the time. After all, as Van Roekel explains, “Diseases affect plants at different times and in different ways.”

Scientists and agronomists agree, however, there are basic steps soybean producers should take to avoid yield loss from soybean disease:

Take the next step to better soybean health

Wherever you’re planting soybeans and no matter the conditions, there are seed varieties, treatments, and disease control options to help you obtain the highest yields possible. You can also connect with your local Pioneer team for advice on what to plant when and how to prevent and treat common soybean diseases.

Protect Your Field and Your Yield

Prevent against and defeat even the most resistant diseases with fungicide solutions from Corteva Agriscience.

ILEVO® is a registered trademark of BASF.