Tar spot is a foliar disease of corn that has recently emerged as an economic concern for corn production in the Midwestern U.S. It is not a new disease, having been first identified in 1904 in high valleys in Mexico. Historically, tar spot’s range was limited to high elevations in cool, humid areas in Latin America, but it has now spread to South American tropics and parts of North America. It first appeared in the U.S. in 2015. During the first few years of its presence in the U.S., tar spot appeared to be a minor cosmetic disease that was not likely to affect corn yield. However, widespread outbreaks of severe tar spot in multiple states in 2018 proved that it has the potential to cause a significant economic impact. 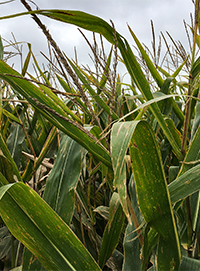 With its very limited history in the U.S., much remains to be learned about the long-term economic importance of this disease and best management practices. The pathogen that causes tar spot overwinters in corn residue but to what extent the amount of residue on the soil surface in a field affects disease severity the following year is unknown. Spores are known to disperse up to 800 feet, so rotation or tillage practices that reduce corn residue in a field may be negated by spores moving in from neighboring fields. Observations so far suggest that rotation and tillage probably have little effect on tar spot severity.

When conditions favor tar spot development, satellite imagery and scouting tools like Directed Scouting and Threat ID from Granular Insights can be a useful tool to identify areas of stress and confirm infection. 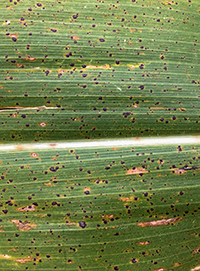 Commercial corn hybrids vary widely in their susceptibility to tar spot. Hybrid selection should be a primary consideration in managing for tar spot. 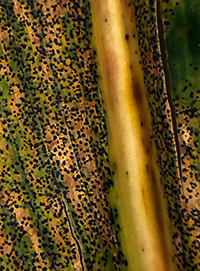 Tar spot is the physical manifestation of fungal fruiting bodies, the ascomata, developing on the leaf. The ascomata look like spots of tar, developing black oval or circular lesions on the corn leaf (Figure 1). The texture of the leaf becomes bumpy and uneven when the fruiting bodies are present. These black structures can densely cover the leaf and may resemble the pustules of rust fungi (Figure 1 and Figure 2). Tar spot spreads from the lowest leaves to the upper leaves, leaf sheathes, and eventually the husks of the developing ears.

Tar spot is favored by cool temperatures (60-70 ºF, 16-20 ºC), high relative humidity (>75%), frequent cloudy days, and 7+ hours of dew at night. Tar spot is polycyclic and can continue to produce spores and spread to new plants as long as environmental conditions are favorable.

Locate a Retailer Near You

Get more than a birds-eye view with Directed Scouting from Granular Insights.