Southern rust (also known as Polysora rust) is favored by high relative humidity and high temperatures and therefore tends to be confined to tropical and subtropical regions more than common rust. In seasons with higher than average temperatures, southern rust can spread into temperate regions where it can impact corn yield. 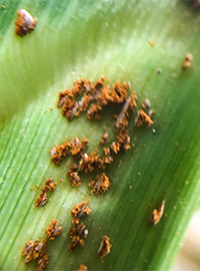 In North America, southern rust usually occurs later in the growing season and is more prevalent in the southern states. Southern rust does not occur as often from year to year as common rust, but it is usually more severe when it does occur.

Both rust diseases of corn can cause substantial yield losses under severe disease pressure; however, southern rust generally poses a greater risk to corn yield than common rust. Yield loss due to rust depends on timing of infection, amount of leaf area damaged, and location of damaged leaves on the plant. If significant damage to upper leaves occurs early in the life of the hybrid, yield losses will be higher. If damage is confined to lower leaves of the corn plant or occurs in the later reproductive stages of development, little economic loss would be expected. Consequently, the latest-planted corn in an area is at higher risk for yield loss due to leaf diseases.

Common rust usually does not reach levels in the Corn Belt that would justify a fungicide application; however, severe infections can occur under conditions favorable for disease development. Such conditions were experienced in several Midwestern states in 2009, a growing season that was characterized by lower than normal temperatures throughout much of July and August (Lutt et al., 2016). Pioneer fungicide research trial locations in Illinois and Indiana experienced intense common rust pressure in 2009. At one research location in Indiana, the average yield response to fungicide treatment was over 22 bu/acre (Jeschke, 2017). Yield response to fungicide treatment varied greatly with common rust pressure at the research locations and hybrid genetic resistance to common rust.

The disease can develop very rapidly during warm, humid conditions.

Locate a Retailer Near You

Get results you can see, from enhanced in-season protection to improved harvestable yield.

Get more than a birds-eye view with Directed Scouting from Granular Insights.