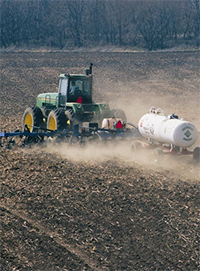 We know you field many questions from your farmers — all good-natured and in effort to better understand technologies that can move the needle and how they can get the most out of their anhydrous ammonia fertilizer investment. Here are four frequently asked questions and answers intended to help your customers maximize anhydrous ammonia applications and, ultimately, yield and profit potential.

Why is it important to maximize anhydrous ammonia applications?

Shortly after application, anhydrous ammonia converts to the ammonium form, which is the easiest form of nitrogen for crops to utilize. The longer nitrogen stays in the ammonium form during the growing season, the greater for plant uptake, hence, the greater the opportunity for maximizing yield potential. If anhydrous ammonia is not stabilized, ammonium will convert to nitrate, a form of nitrogen that is more susceptible to loss by leaching and denitrification.

Why should farmers apply anhydrous ammonia with N-Serve® nitrogen stabilizer?

N-Serve® nitrogen stabilizer helps reduce leaching during excessive early season rain events by keeping anhydrous ammonia in the ammonium form longer. Up to 70 percent of nitrogen loss can occur below ground from leaching, most often the result of excessive spring rains. Research shows that more than 20 percent of applied anhydrous ammonia can be lost after just one or two significant spring rainfalls. By protecting nitrogen in and around the root zone, N-Serve helps keep the maximum amount of nitrogen available when crops need it most — ultimately helping optimize corn yield potential. N-Serve also promotes improved standability and reduced risk of stalk rot during the growing season.

When should N-Serve® nitrogen stabilizer be applied?

Maximizing anhydrous ammonia fertilizers applications with N-Serve® nitrogen stabilizer is proven by more than 40 years of independent and third-party university research. Hundreds of field trials document a 7 percent increase in corn yield — the equivalent of more than $32 additional revenue increase per acre.*

No other nitrification inhibitors have been as widely tested by as many university or independent scientific research as N-Serve.

Kent Klingbeil recommends N-Serve to every customer applying nitrogen in spring or fall.

“To me, N-Serve is one of the most proven products in the market today,” said Klingbeil, precision ag specialist for Landus Cooperative with headquarters in Ames, Iowa. “There’s no arguing the yield advantages. You’re always going to break even, but more often will increase revenue per acre by using it. Ultimately, using N-Serve and Instinct makes farmers more profitable.”

*Value based on average cost of N-Serve® nitrogen stabilizer per acre. Please see your local retailer for the most accurate estimate.