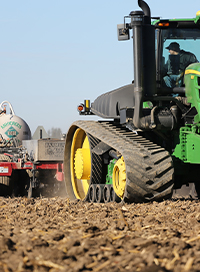 As we embark on a new year, let’s take a closer look at N-Serve and what makes it such a trusted tool in a farmer’s toolbox.

In the late 1950s, scientists for The Dow Chemical Company discovered the nitrification-inhibiting ingredient nitrapyrin. Those scientists introduced nitrapyrin to the greater scientific community in 1962.

In the last 45 years, there have been more than 1,000 trials and university studies that show N-Serve works. There is data to back it up.

Today, N-Serve continues to be a product you can trust to protect anhydrous ammonia. Consider it when you’re thinking about spring applications.

Aside from the economic and environmental benefits previously mentioned, N-Serve provides these agronomic benefits:

2021 has just begun. We don’t know what the year holds or what exactly the weather will bring this spring. But we do know N-Serve can help protect your nitrogen investment. After all, it’s been proven to do just that over 45 years.