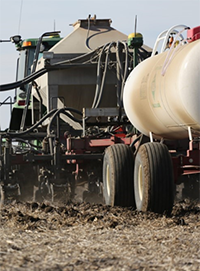 Abnormal weather conditions can lead to what iscalled an open winter. According to Mike Koenigs, Market Development Specialist with Corteva Agrisicence, Illinois, an open winter is when warmer conditions lead to a lack of frost in the soil, allowing moisture to soak in.

“So far, it’s been a warmer than average winter, and there is little to no frost in the soil,” said Koenigs. “In a normal, average winter, by early December, we have frozen soil to where it can’t absorb any moisture. When there’s no frost, moisture can still soak in. Therefore, if we don’t get a lot of frost in the soil, that means the soil can dry out and warm up quicker, potentially leading to an early spring.”

While most rejoice at the thought of an early spring and the chance for more temperate conditions to return, those conditions come with some challenges. For one, frozen soil allows for better protection of nitrogen. Mild winters and early springs provide numerous opportunities for nitrate loss via leaching and denitrification.

This year, however, many farmers and retailers have not been able to apply nitrogen in the fall due to weather. “The fall of 2018 and 2019 were both significantly wetter than normal,” said Koenigs. “Because of that, it delayed harvest, made it difficult to do fall tillage and fall fertilizer applications were wildly delayed or missed.”

If fall nitrogen applications were missed, spring applications, will be crucial. Koenigs says it will also be crucial to protect applied nitrogen with a nitrogen stabilizer.

“N-Serve delays the conversion of nitrogen in the ammonium form to the nitrate form, ensuring the nutrient is in the root zone when the corn needs it. Instinct provides similar protection for UAN and urea,” explained Koenigs.

As farmers look to the upcoming growing season, some best practices include:

In all, a projected early spring doesn’t have to be alarming if farmers and retailers closely monitor conditions in their area and are prepared to make appropriate actions in their nutrient management plan, including use of a nitrogen stabilizer.

“N-Serve will keep the nitrogen in the root zone, where the corn needs it later in the season, so nitrogen applications can be made earlier. Earlier applications of nitrogen can potentially help reduce soil compaction,” said Koenigs.

Contact your state pesticide regulatory agency to determine if a product is registered for sale or use in your state. Do not fall-apply anhydrous ammonia south of Highway 16 in the state of Illinois. Always read and follow label directions.