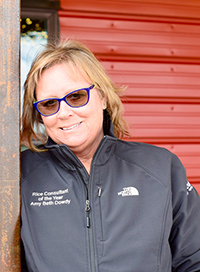 Knowledgeable. Driven. Pioneer. Trailblazer. Whatever the descriptor, there is no disputing the industry wide respect for our 2020 Rice Consultant of the Year. The award, sponsored by Corteva Agriscience and Rice Farming magazine is in its fourth year.

In her 31st year as an independent crop consultant, Amy Beth Dowdy of Dexter, Missouri, considers herself a walking alarm system for her often spread-thin rice growers.

“With so many irons in the fire, rice growers can’t always keep up with everything. I give my growers a heads-up about emerging agronomic issues,” she says. “It’s not that the grower isn’t knowledgeable. It’s that he doesn’t have time to know what problems are getting ready to pop or which fields may currently need more attention than others.”

As an independent crop consultant, Dowdy is guaranteed boots on the ground once a week. It’s her job, she says, to alert her grower-customers of which field is “the squeaky wheel” each week.

A Missouri native, Dowdy began crop consulting while still in college earning her bachelor’s degree in agronomy from Mississippi State University. As an intern for then-retailer Terra, she was training as a salesperson when the company began offering crop consulting as a service to its grower-customers.

“When we started, there was the general consensus in the agricultural industry that nobody would pay you to make agronomic recommendations to help growers produce a high-quality crop,” Dowdy says.

Terra hired Dowdy, after she completed her internship, to continue consulting for its customers.

After four years walking fields, Dowdy was promoted to management, but she found she missed being in the field. To remedy that, she went out on her own and became an independent consultant, opening ABD Crop Consultants LLC in 1996.

“There was still the general consensus that rice growers aren’t going to pay a crop consultant to tell them what to spray in the field,” she says. “Here in the northern end of the Delta, I was told that men would not willingly pay me to do something they already know how to do.”

In 1990, when Dowdy began consulting, crop consultants were cotton scouts. Pioneers Ray Young and Grady Coburn of Louisiana and David Wilde of Texas focused on cotton insects, as they had since before 1978 when they helped established the National Alliance of Independent Crop Consultants (NAICC).

“Consulting in rice was unique because it was a season-long approach encompassing all production inputs, not just insecticides,” Dowdy says. “Having only a few insect issues in rice, we focused on weeds and fertility and went about consulting in a different direction.”

More than three decades later, Dowdy is a member of NAICC and has served on the organization’s executive board.

“Being an independent consultant means I am not being pressured to sell. I recommend what needs to be on the field versus what is in the warehouse,” she says. “I am not selling to clear inventory. I am making a prescription based on the needs of a particular field. It’s not a blanket application.”

She adds, “As long as I work hard, rice growers haven’t really minded that I’m female. If you don’t have the necessary work ethic, however, you won’t be respected, no matter your gender.”