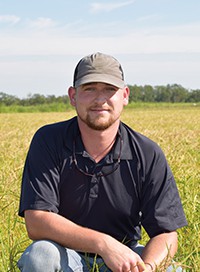 The newest herbicide in the Corteva Agriscience™ rice portfolio was put to the test this year in south Louisiana, and it turned in quite an impressive performance.

Richard Ellerbe, a retail agronomist with Simplot Grower Solutions in Iowa, Louisiana, tested the power of Novixid herbicide against aquatics, such as alligatorweed and ducksalad, as well as tillering barnyardgrass.

“We’re trying to get big barnyardgrass and aquatic weeds controlled,” he says. “Novixid is freaking fantastic. It nailed it. Even after two weeks, the weeds never showed back up. We knocked the big stuff down, and it stayed down. And the residual advantage of the product was evident.”

Ellerbe applied Novixid at a 27.4-ounce rate with 1 pint of MSO surfactant to drill-seeded conventional hybrid rice. Applied by aerial applicator, the treatment went out immediately pre-flood when the RiceTec XL753 rice was beginning to tiller. The field was also previously treated with glyphosate plus Command herbicide at planting.

“Most importantly, you want to come with water right behind drill-seeded rice when treating with Novixid,” Ellerbe says.

“We had moisture out there already at the time of application, and then we got the permanent flood on that field within three days,” he says. “Water is your friend. The faster you can get water on it, the better. I would recommend beginning to run water across the field the day of application, if at all possible.”

While the product certainly can be used in all production systems, including the CLEARFIELD® rice system, the best fit, Ellerbe says, is conventional and hybrid rice varieties.

With conventional rice, there aren’t many tools available that are economical and give you broad-spectrum weed control.

“Barnyardgrass is the No. 1 grass issue we have in rice. When it gets big, like any grass, it gets difficult to control. With the two active ingredients in Novixid, you are picking up broadleaves, grasses, aquatics and sedges,” Ellerbe says. “The rice field we tested was getting out of hand before we applied Novixid.

“After a few days, we could start to see symptoms on the aquatics and other weeds. At two weeks, you know the product is working. And at three weeks, all of the weeds are dead, with no negative crop response at all.”