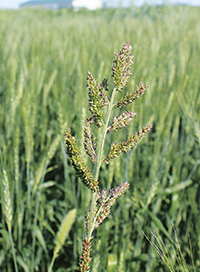 “It didn’t look like a rice field. It looked like a grass patch when we started,” says CPS consultant Elmer Smith of Blackfish, Arkansas, describing a 40-acre, freshly leveled field that had been fallow for five years.

“It was a grown-up mess,” Smith says. “Just about any weed species you found in eastern Arkansas was in this field.”

A rice crop on fields recently leveled should not receive a preemergence herbicide application. When land is formed, matter is moved around, making areas of the field with low organic matter and creating potential for crop injury, Smith says.

“The soil was heavy — the kind of mud that will suck your shoes off,” Smith recalls.

Without herbicide applications, the barnyardgrass grass flourished, ranging from just emerged to almost tillered. Smith knew he needed a strong herbicide program to save the field. He recommended 20 ounces of RebelEX® herbicide, 21 ounces of FACET L herbicide and 1 quart of MSO surfactant per acre.

“The grass was much bigger than the rice,” Smith says. “The main reason I chose RebelEX was because of the barnyardgrass. We’ve had FACET-resistant grass for several years.”

He waited until rice reached the three- to four-leaf stage before the aerial application and then flooded two weeks later. The rice needed to be that size for FACET to be applied to the cut ground without hurting the crop, Smith explains.

“The combination did a really good job,” Smith says. “The RebelEX did an excellent job. I was shocked that it killed even the most mature grasses.”

When he first evaluated the field, Smith told the farmer that it may seem costly upfront but if this was the only application they needed, he would save money and boost yield.

“If RebelEX wasn’t an option, my only choice would be to apply FACET, flood and come back with Clincher,” Smith says. “It would have required two applications and cost more. We wouldn’t have killed all the grasses, and yield would suffer.”

For Smith, the most important outcome was that his customer was happy.