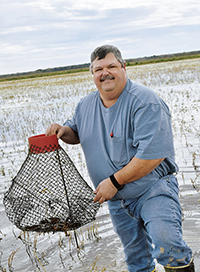 When continuous rains hit between harvest and planting season, many growers are prevented from completing off-season fieldwork. If growers are unable to prepare fields and pull levees, they may need to change production systems.

Almost 20 years have passed since the CLEARFIELD® Production System changed how red rice is controlled. In that time, many South Louisiana rice growers converted from water-seeded to drill-seeded production systems.

“My dad farmed for 50 years and always laments not having something for red rice control. The red rice would just choke you out,” says Andre Fabacher, a retailer-consultant with Sanders in Eunice, Louisiana. “CLEARFIELD was one of the best things that happened to the rice industry. The next best thing has been Grasp SC and RebelEX, because of the spectrum of control provided and the ease of use.”

But a wet off-season can change that. “If growers aren’t able to pull levees, they’ll have to water-seed. In a water-seeded system, the plants’ roots are on top of the soil,” he says. “We get one shot at weed control here in Louisiana.”

The change means more herbicides will likely be aerially applied and exposed roots will limit use of some herbicides.

“In water-seeded systems, I always recommend Grasp SC. It has been one of my mainstays, and nine times out of 10, it will be in the tank,” Fabacher says. “It does a wonderful job on the broadleaf weeds we have, and the residual on barnyardgrass can’t be beaten.”

Another change Fabacher saw in a wet year like 2019 was a return to conventional rice varieties such as Cheniere and Mermentau. After years of using the CLEARFIELD Production System, growers are considering fields red rice-free and are converting to what they consider a more economical system.

“Our red rice control in that scenario will be a pinpoint flood application of Grasp SC,” he says. “In cases of resistant barnyardgrass, that’s where RebelEX will come in to play.”

Before the price decrease on RebelEX® herbicide a few years ago, Fabacher says, growers tended to use it as a salvage treatment. “It will be a product of first choice and will play in that market now. It’s a product that is flexible in time,” he says.

Whether a grower is using a water-seeded or drill-seeded production system, Fabacher says, Command herbicide preplant followed by Loyant® herbicide is a winning combination.

“Loyant has a perfect fit in South Louisiana. It controls all of the weed spectrum that we have issues with as long as you get water across it in a timely matter,” he says. “It’s a game changer for us. We can apply it anywhere for two-leaf to green ring.

“With Loyant, we are putting one product in the tank, and it includes all of the weeds we have issues with. Loyant eliminates doubt at application. I’d rather be proactive than reactive with weed control.”