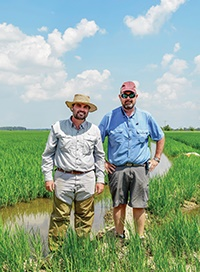 “It’s been a long time since I’ve been caught without levees, but we were waiting for the water to get off,” says the Brinkley, Arkansas, rice producer. “From fall to spring, we didn’t go seven consecutive days without a rain.”

Wet conditions forced Grizzle to plant his rice with an air rig while also applying fertilizer. “Every field I have was rutted up from one end to the other. It was terrible,” he says.

Staying ahead of quickly growing weeds in rainy conditions was a challenge, but there was at least one unintended benefit of enduring nature’s wrath.

“Getting herbicides out was a challenge with it raining all the time, but my fields stayed muddy, which was great for product efficacy,” he says.

Because much of Grizzle’s rice acreage is planted to CLEARFIELD® hybrids, his weed control program begins with either NEWPATH or CLEARPATH herbicide tank-mixed with Regiment herbicide. He follows with an early postemergence application of RebelEX® herbicide to control sprangletop, barnyardgrass and aquatic weeds.

“The CLEARFIELD system only controls red rice,” he says. “We get broad spectrum weed control with RebelEX at a competitive price.” To combat troublesome weeds on both his contour and straight levees, Grizzle applies Loyant® herbicide with a ground rig.

“Loyant is death on pigweed,” he says.