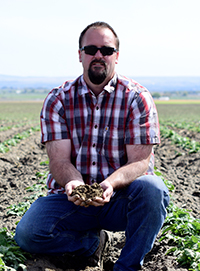 A healthy soil is a soil that can create food and long-term opportunities.

Morris, who grows potatoes, sweet corn, peas, wheat and several other crops on Schneider Farms in Pasco, Washington, says, “You continue to farm because you make money. Our business has to sustain itself, and we cannot do that without healthy soils.”

As he sees it, there are three pillars that, together, comprise sustainability: environmental impact, social impact and economic impact.

“None of these are more important than the others,” Morris says.

When visual symptoms of nematode damage are present in a potato field, it is often too late to act.

“Nematodes can cause complete financial ruin. We lose a half million dollars or more if a field of potatoes is rejected because of nematode damage,” Morris says. “There is almost zero tolerance in the potato processing world for nematode damage. Everything I dig out of the ground is a French fry in a freezer within six hours of harvest.”

There is almost zero tolerance in the potato processing world for nematode damage.

The primary nematode issue in potato production is the root-knot nematode. Its feeding causes damage to potatoes, which results in potatoes being rejected by processors.

Last year, Morris says he had more than four fields with severe damage and high incidences of galls caused by root-knot feeding.

“The nematode is the most plentiful organism on earth,” he says. “You would probably find every species type if you look hard enough for them in a potato field, including root-knot, lesion and stubby nematodes.”

As degree-day numbers increase during the growing season, so too do root-knot nematode populations.

Morris treats his potato fields with Vydate® C-LV insecticide/nematicide beginning in late June or early July. He cites the short seven-day preharvest interval and plant health as benefits of Vydate.

“We base our program for Vydate on fall sampling numbers and our experience with the history of each field,” Morris says. “We apply Vydate for nematodes as well as other pests even if a field has been fumigated.”

To help combat the microscopic pests, Morris also tests his sandy soils for nematodes once a year as soon as the last crop of the year is harvested.

“If you wait, those nematodes drive down into the soil profile, and as it cools they go deeper, making it more difficult to accurately evaluate population numbers,” he says. “And in-season sampling is tough,You never get the results you expect.”

How Farmers Are Improving Ecosystems

In addition to remaining economically viable, Morris is focused on maintaining and improving the ecosystems that sustain his crop production.

When his land is not producing potatoes and other crops, he protects his soils with cover crops, including white mustard and sudan grass.

“As a vegetative ground cover, white mustard works well to minimize erosion and return biomass into the ground. And when worked into the soil, it has some biofumigant properties,” Morris says.

White mustard, when shredded and immediately worked into the soil, also can help manage rhizoctonia, a costly disease organism.

Another avenue to improved environmental impact is the decreased use of an active ingredient needed to control pests, such as nematodes. That is often accomplished by swapping from a product that requires a high use rate to one that offers a low use rate to control the same pest.

Another avenue to improved environmental impact is the decreased use of an active ingredient needed to control pests, such as nematodes.

“We are focused on not doing any additional harm,” he says. “We need to protect what we have now with less.”

While farmers are working diligently to improve soil health, it is important to relay that information to nonfarming consumers.

“Many people believe that virgin ground, or ground that has not been farmed, is healthier than farmed land,” Morris says. “However, the fertility and organic material in our ground is greatly improved over virgin ground.”

For example, Morris samples his fields each week to monitor soil nutrients and provide any needed nutrients on demand.

The agricultural industry has progressed, he says, because farmers are actively improving their soils. “We are not wearing out soils. Our land is 100% spoon-fed each week with the nutrients it needs.”

“We have greatly improved our soils over time, evidenced by our continual increase in production,” Morris says. “In my mind, healthy soils allow you to continue growing food without a decline.”