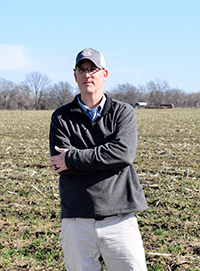 You can’t see them, but lurking under your soil are many different species of plant-parasitic nematodes devouring the roots that a healthy crop requires. Controlling damaging nematodes while protecting beneficial organisms is key to nurturing healthy, productive soil.

Most nematodes are nearly microscopic – too small to see with the naked eye. Spotting the worm-like pests requires microscopic magnification.

“Plant-parasitic nematodes number in the hundreds of different species within several different classifications of genera,” says Tom Allen, professor and plant pathologist with Mississippi State University. “The overall classification is based on morphology or how that little worm looks under a microscope.”

The reniform nematode (Rotylenchulus reniformis) prefers soil series that have more silt or are loamier. It is primarily a concern in cotton and soybean production.

Although there are many different root-knot species, how problematic they are may depend on the crop being planted.

“A relatively new concern is the guava root-knot nematode, or Meloidogyne enterolobii. It is certainly becoming problematic from the standpoint of moving sweet potatoes and sweet potato planting stocks from state to state,” Allen says.

“Several states are interested in looking for the guava root-knot nematode, but as of right now, the guava root-knot nematode has only been identified in small areas in North Carolina and Louisiana. Those are the only two states within the United States for overall general sweet potato production where they have actually identified the presence of that nematode in soil samples.”

“There are several lance nematodes with the Columbia lance nematode being one of the more important ones, especially in cotton production,” Allen says.

Soybean cyst nematode (SCN) is only problematic in soybeans. It has spread to practically all important soybean production areas of the U.S. and Canada.

Nematodes generally are not problematic in high-clay soils, including those commonly referred to as alligator clay or buckshot.

“Interestingly enough, most soils also have what are considered free-living nematodes. Those would include bacterial and fungal feeders. They're really not problematic from a standpoint of impacting overall plants or crops in general,” Allen says.