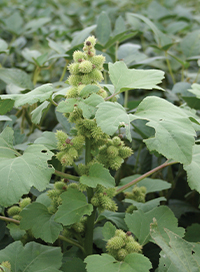 Common cocklebur is known as one of the most competitive weeds in Midwest soybean fields, but it also can cause trouble in your cornfields if you’re not careful.

The weed has made a strong comeback in the last couple years thanks to changing weather patterns. Cocklebur emergence is becoming unpredictable. So, you’ll want to make sure to control it regardless of the forecast.

Common cocklebur is known for its prickly burs that attach themselves to animals, clothing or human hair. Those burs, which contain two seeds each, can be carried far and wide thanks to their spiny exteriors.

The weed used to emerge in late spring, but it is now often showing up in early summer. This means residual herbicides may have already run out before the cocklebur seedlings ever make an appearance. This change in timing makes the weed particularly difficult to control.

Add to that, herbicide-resistant common cocklebur has been recorded in 12 states, including Illinois, Iowa, Kansas, Missouri and Ohio. Those weeds have shown resistance to ALS-inhibiting herbicides.

So, be on the lookout for cocklebur next season.

What to Watch for

Common cocklebur seedlings have purple stems with large, shiny, waxy, bright-green leaves. The early leaves appear in an opposite pattern.

Adult cocklebur plants can grow up to 4 feet tall. They have the unique prickly burs, as well as triangular, toothed leaves that grow in an alternate pattern. The leaves are also known for having a distinctive smell. Mature stems are thick with purple or black spots.

You can find these weeds in most fields and pastures. They’re particularly prominent in open, moist areas.

As a summer annual, cockleburs will typically flower sometime between July and October. The specific timing depends on the climate and the weather in any given year.

How to Control Common Cocklebur

To control common cocklebur, you’ll need to make note of when it tends to emerge in your area. Then you’ll want to plan a good program approach with several modes of action and long residual control.