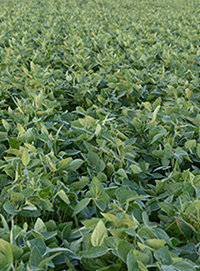 For 2022, how will you choose the soybean trait system best suited for your fields?

“It really comes down to you have to know what's growing in the field,” said Aaron G. Hager, associate professor in weed management in the Department of Crop Sciences, University of Illinois. “If you pick the system, based on what your individual criteria are, are you certain the herbicide that accompanies that trait will sufficiently control the spectrum of weeds that you have?”

Scout for Weeds Early and Weekly

Just what kinds of weeds are you really dealing with in those fields? There are a range of new tools to help you scope out the variety and extent of what you're really facing for 2022.

Use identification guides and smart phone apps. You can send samples to the extension weed scientist in your state. Do your homework to understand exactly which products control which weeds.

Dicamba trait soybean crop systems are marketed as having a “low-volatility dicamba formulation and glysophate for additional herbicide tolerance,” though there have been widespread reported cases of dicamba drift issues.

Another big advantage of the Enlist E3® trait system is that farmers can spray through Stage 2, the flowering stage, which is generally two to three weeks longer than other traits systems allow, according to Steve Snyder, an Enlist™ technology specialist for Corteva.

Dicamba herbicides can be sprayed up to and beginning R1 growth, which is the beginning bloom, and through June 30, the label says. Some states set application timing restrictions earlier; it's important to be aware of your state's rules before application.

One big advantage of the Enlist E3® trait system is that farmers can spray through Stage 2, the flowering stage, which is generally two to three weeks longer than other traits systems allow.

Even with proper application according to the label, dicamba is known to be highly volatile under the right conditions. In university-published, peer-reviewed articles, researchers identify issues with dicamba volatility three or four days after application, Hager notes.

And with Enlist E3® soybeans, growers can spray upwind of any soybean, says Snyder and Andy Carriger, also a Corteva Agriscience Enlist™ specialist.

“Just the lack of application or buffer restrictions allows people to go out and be very compatible with other traits, like Liberty, or even conventional soybeans,” Carriger explained. “You can go row to row, right next to it with Enlist and not have to worry about restrictions. Soybeans without the Enlist trait are not a susceptible crop.”

"You can go row to row, right next to it with Enlist and not have to worry about restrictions. Soybeans without the Enlist trait are not a susceptible crop."

With dicamba technology, many growers concerned with volatility and being “neighbor-friendly” have no intention of spraying over the top and are “spending a lot of money for a trait, simply for protection, with no intentions to use it,” Carriger remarked.

Using the Enlist E3 trait, he said, gives growers more options and flexibility, including easy cleaning of Enlist water-based products from sprayers. Growers are climbing aboard since the 2019 launch of Enlist E3® soybeans, he notes, with 35% market penetration predicted for 2021.

Your next step is to understand product labels, Hager said, because with dicamba soybeans, for example, you cannot tank mix dicamba products with glufosinate.

“On the other hand, with the Enlist system on the E3 soybeans, you can tank mix the 2,4-D choline,” Hager said. “On Enlist One, you can tank mix with glufosinate products,” such as Liberty® herbicide. “In our opinion, that's going to be a more effective way to help manage the evolution of resistance.”

The transgenic soybean event in Enlist E3® soybeans is jointly developed and owned by Dow AgroSciences LLC and MS Technologies, LLC. Enlist Duo and Enlist One herbicides are not registered for sale or use in all states or counties. Contact your state pesticide regulatory agency to determine if a product is registered for sale or use in your area. Enlist Duo and Enlist One are the only 2,4-D products authorized for use with Enlist crops. Consult Enlist herbicide labels for weed species controlled.

Varieties with the LibertyLink® gene (LL) are resistant to Liberty® herbicide.

Liberty®, LibertyLink® and the Water Droplet Design are trademarks of BASF.