Weather worries about the 2021 cropping season becoming like the 2012 drought in the Corn Belt aren’t too concerning to DTN senior ag meteorologist Bryce Anderson.

“In 2012, the drought was wide-spread across the Corn Belt because it was dry everywhere after 2011," Anderson says. "This spring, we’re going to see adequate moisture east of the Mississippi River, which wasn’t the case in 2012.” 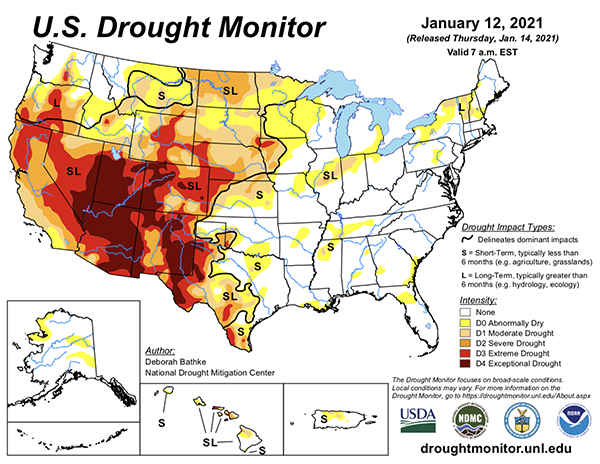 The biggest weather concern right now is drought conditions in the western Corn Belt. According to the National Oceanic and Atmospheric Administration (NOAA), 82% of the North Central Region is in some form of drought. “The most extensive drought is west of the Mississippi, more severe in the Dakotas, Minnesota, Nebraska, Kansas, western Iowa and northern Wisconsin,” Anderson says. 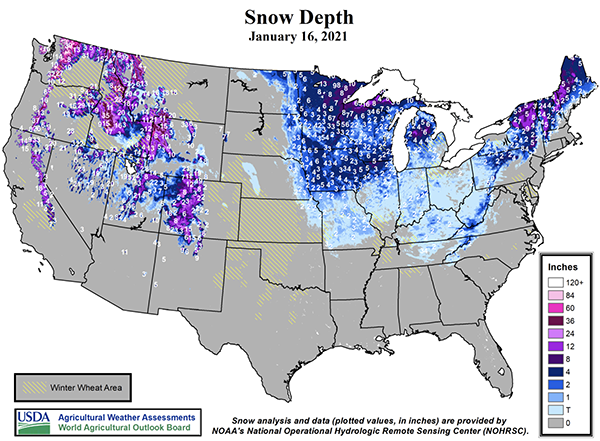 The winter snowpack currently isn’t set up to help the moisture situation. In the country’s prime row crop sector, precipitation is only 10% of normal over the past 60 days. And most of the region has been dry in the past 90 days. “Much of the upper Midwest—Minnesota, Wisconsin, Iowa—have had below-normal snowfall," he warns. "Down in Missouri toward the St. Louis area, they’ve had less than 5% of normal snow.”.

Unlike last year, the Corn Belt has no surplus soil moisture except in small portions of Wisconsin and Michigan. Except for North Dakota, the upper Midwest is showing average soil moisture profiles. The biggest moisture concerns are in Kansas, Nebraska, western Iowa, and central Illinois into northern Indiana.

Anderson says that the La Nina weather pattern should continue through the winter with a potential transition to a neutral temperature pattern in late spring, early summer. “I think there's a lot of importance on how the late winter into early spring acts," he notes. "Indications are we would see more La Nina-type storms in late winter and early spring to possibly help the moisture situation. But I don't think there's going to be a lot of help in the real dry areas.” 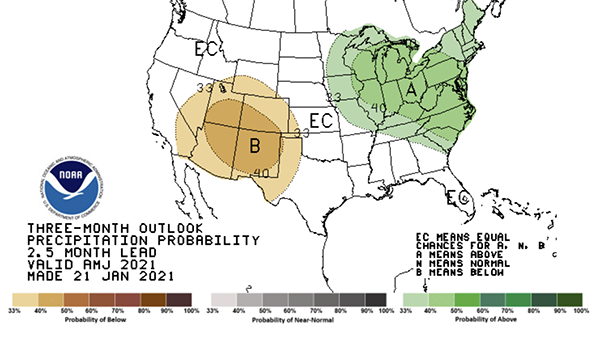 Regarding planting weather, Anderson forecasts there will be a decent soil moisture recharge east of the Mississippi. “We might see some planting delays due to excess moisture, but since the soil profile is short, even a two-inch rain would likely soak in and not cause flooding,” he says.

The western Midwest dryness is a concern, especially in non-irrigated areas. He says pivots in Nebraska and Kansas may run before planting or after to get the crop up. “The rest of the dryland area may have problems planting," Anderson predicts. "It might be like Brazil this year where planting was delayed waiting for enough moisture.”

The other concern about dryness is the prospect that La Nina could redevelop by summer into the fall. “If that happens, there could be a reoccurrence of drier conditions during the grain-fill stage, similar to last year,” Anderson says.

He expects a variable moisture situation for planting this year. “I'm not confident that things are going to completely shape up to where one can just guarantee trendline yield,” he adds. 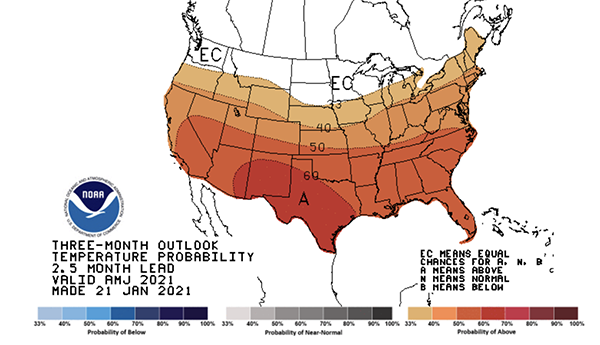 Anderson says the rest of winter and through the spring show above normal temperatures. The only chance for near- to below-normal temperatures is in the upper Corn Belt, north of Interstate 90. “This will allow fieldwork to proceed as drier soil warms up quicker. But it also starts up the whole vegetative cycle that begins to draw down available moisture,” he notes.

The ag meteorologist doesn’t think the weather conditions are shaping up for a repeat of the 2012 drought. “There is still reason to be concerned about achieving trendline yields due to current dryness. We will need noticeable improvement in the soil moisture profile during the last half of February into March to change yield forecasts.”