Wheat growers are looking ahead to 2020 after having endured an extremely challenging 2019.

In the northern Plains geography specifically, weather extremes ranging from very wet in the southeast region to near drought at times in the northwest northern Plains resulted in uneven growth, thin stands and late maturity. Weeds grew quickly due to herbicide spray delays caused by wet conditions, making effective control a challenge. Another challenge for growers in the northern Plains was the introduction of new weeds to areas where they hadn’t been present before. 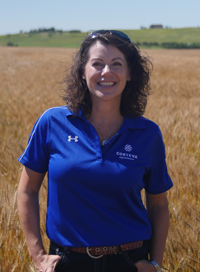 “We helped wheat growers tackle weeds in 2019 that they hadn’t faced before,” said Bridgette Readel, Corteva Agriscience market development specialist based in Hunter, North Dakota. “Floodwater from heavy rains early in the season brought along weed seeds from other regions, presenting farmers with new weed challenges to tackle. Another source of new weed species can be attributed to hay delivered from other areas during the drought we faced over the past couple of years.”

According to Readel, wet spring weather delayed planting and led to a longer spray season, because the wheat crop was in so many different growth stages throughout the growing season, depending on when farmers were able to get fields planted. The wet weather caused spraying delays and allowed weeds and grasses to get established, making weed control more difficult.

“Wheat stands were thin in many fields, which allowed weed flushes to emerge later in the season in areas where crop canopy was not achieved due to poor stands. This extended the spray season longer than usual in many areas,” Readel said.

The advantage from Corteva Agriscience.
The cereal herbicide offerings from Corteva provide growers several advantages — such as weed resistance management and better control of a wide spectrum of broadleaf weeds and yield-robbing grasses — compared with competitors’ products.

“Corteva products are great in controlling what we say we’re going to control,” Readel said. “Quelex has garnered a lot of attention for what it brings to the tank for additional weed control options such as ragweed, marestail and kochia. OpenSky has a great fit with growers who have been adding more rotational sensitive crops to their operation and are investigating effective herbicide control options.”

The complete portfolio of broadleaf and grass weed control herbicides offers growers many options. “Corteva cereals herbicides control a long list of weeds, and we also have several tank-mix options. This product compatibility helps address resistance issues by extending various modes of action. Plus, our products provide growers with flexibility. Many of our products have a large application window, so growers can time the application to the right weed size,” Readel said. “This was a huge asset this past year with the frequent rain during the growing season and thin stands in many fields.

We saw more late-season grass than usual and weed flushes kept coming throughout the season as the crop matured. “We saw a lot of weeds when the crop was young/small and because the canopy was very lush early on, weeds got plenty of sunlight to encourage their growth. As the season continued, with heavy rain we saw more flushes of weeds as well.”

Assessing harvest.
Readel describes the 2019 harvest in four words: long, wet, late and difficult. Wheat harvest in many areas of the northern Plains was still in progress during late September, delayed due to heavy rain and affected quality. Hail damage was also reported, resulting in significant damage.

Yet surprisingly, given the environmental and weather challenges, reported yield was respectable, although diseases hit hard in some places. “Early planted wheat yields were good; late wheat took time to dry down for harvest in the western northern Plains; and quality suffered because of heavy rains when farmers were trying to get the crop harvested,” Readel said. “Yields were average to above average based on geography, and quality was variable, particularly in the east region where growers experienced deductions for ergot at the elevator.”

Considerations for 2020.
Looking ahead to 2020, growers should consider answering several questions, reflecting on the past year as they observed from the combine cab. What were they seeing? Were there problem areas in specific fields and can they identify the cause? Did their choice of herbicide products work as expected? Were late-season weed flushes an issue? What new weeds surfaced that were not expected? Was there more disease pressure than in the past?

The biggest concern growers face in the current climate of marginal commodity prices is how to break even on their farm. As is the case seemingly every year, growers will need to pay even closer attention to expenses without compromising yield potential.

“Corteva understands the challenges and plight of farmers, regardless of the crop,” Readel said. “We have a fit if you’re a corn, wheat or soybean farmer, or if they grow peas, lentils or potatoes. Yet, products aside, we understand how difficult it is in today’s market to turn a profit. We are committed to providing agronomic products and services that help maximize yield potential in the most efficient, effective and price-conscious way.

“Like the slice of bread that is so versatile on a kitchen table, Corteva is very versatile with active ingredient offerings that cover a wide range of agronomic needs. We truly bring a lot to the table. Growers’ challenges are our challenges. Corteva is committed to helping our customers succeed.”