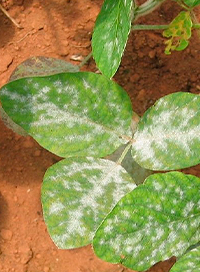 Powdery mildew is a disease that affects a range of plants, including soybeans. In soybeans, this disease is caused by the pathogen Erysiphe diffusa. If weather conditions are favorable for disease development, powdery mildew can reduce the number of soybean bushels in a yield.