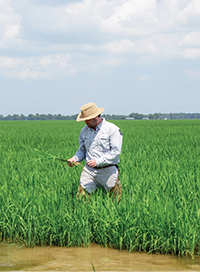 The adage that time is money has convinced a handful of adventurous Mid-South rice producers to convert acreage to a row rice production system.

Traditional rice acreage is often converted to row rice because the system saves time and labor. “In fields requiring contour levees, row rice production can save a grower substantial time by negating the need to build levees,” Morris says.

Controlled by the permanent flood, weeds such as Palmer amaranth (pigweed) are rarely a problem in conventional rice production. That changes in a row rice production system.

“With row rice, you are completely changing the whole environment of rice production,” Morris says. “The flood pretty well handles our pigweed population. Without that flood, you’re looking at heavier weed pressure and additional grass pressure. It’s a challenge until you can get the rice to canopy.”

“Loyant helps a lot with the added weed pressure that comes with the row rice system. There are fields where pigweed control would be impossible without Loyant,” Morris adds.

With the addition of Loyant with Rinskor™ active to a row rice production system, control of broadleaf weeds, sedges and grasses is improved.