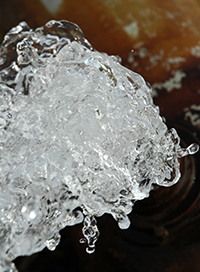 Row rice, also known as furrow-irrigated rice, creates three zones in the field: a zone closest to the pipe that is consistently flushed with water, a zone that is intermittently wet and dry, and a zone that remains flooded throughout the growing season.

Disease management differs in furrow-irrigated rice systems because eliminating the permanent flood that would normally be present in conventional rice production can result in increased inoculum, which can increase disease potential.

“Maintaining a flood is an important aspect of disease management in rice,” says Tom Allen, Mississippi State University plant pathologist. “The organism that causes leaf and neck blast is present in most rice fields at some level. In flooded rice systems, maintaining a permanent flood of at least 4 inches can reduce the potential risks associated with blast. Managing leaf blast with a fungicide is not economical. However, managing the disease with the flood is one important aspect of disease management in flooded rice production.”

Growers should begin scouting for leaf blast about the time of midseason fertilizer applications. Blast symptoms usually appear about one to two weeks post-flood, depending on the environment. Disease infestations may be found earlier in the season if excessive rain, cool temperatures and high humidity levels are present. When it comes to early season issues, seed treatments were important to start the 2018 season.

In 2018, much of the Mid-South rice crop sat in the ground for two to three weeks before emergence because of cold, wet weather conditions. “When the rice seed and seedling are sitting in neutral, potential yield is already compromised,” Allen says, “and you’ve opened your crop up to additional postemergence disease issues.

"Once you can see a plant emerge from the soil, that plant is no longer protected by a seed-applied fungicide. Every year is going to differ, but how much disease pressure occurs that could impact an emerging plant will depend on weather conditions."