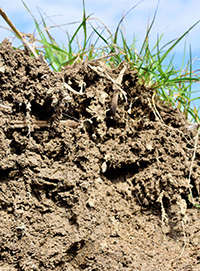 Nematodes, particularly root-knot, diminish yield as they feed on roots, limiting water and nutrient supply for plant growth and development.

Guava root-knot nematode (Meloidogyne enterolobii) appears to be a more virulent species that significantly reduces yield even at lower population levels. This species also reduces the portion of the crop that is marketable by producing unsightly galls on the sweet potato surface.

Often, nematode damage is attributed to other causes such as drought, nutrient deficiency or disease. Symptoms of nematode damage can mimic other issues because both nematode damage and agronomic causes include the same stunting, wilting or yellowing of plant tissue. In severe cases, plants die.

Nematicides are essential control tools. But how does a nematicide’s ability to move through the soil impact its effectiveness against plant-parasitic nematodes?

Soil-applied nematicides must move through the soil well enough to target nematodes within the root zone. Too little soil distribution and the nematicide’s effects are short-lived as they become unable to protect roots as they grow. Too much soil movement and the active ingredient is diminished and is no longer effective.

“For effective control, a nematicide must exhibit the precise mobility characteristics required to get the active ingredient where it needs to be without traveling further than is needed,” says Marta Garcia, Corteva Agriscience global program leader for insecticides and nematicides.

“Some products have less soil movement, which can be a strong negative,” Garcia says. “Nematodes don’t just exist within a few inches in the soil.”

Subscribe for Updates
Get expert insights on improving soil health, controlling nematodes and enhancing profitability delivered to your inbox.