When things are going well, the tendency can be not to rock the boat with change. Don’t tell that to Clay Electric Cooperative, Inc. In 2018, it decided to shake things up in hopes of invigorating its already successful herbicide program with better brush control and improved worker safety. It started with new foundational herbicides, Vastlan® and Milestone® herbicide, followed by implementation of a closed-loop delivery system. Both changes are already paying dividends.

As one of the largest electric cooperatives in the country, Clay Electric serves 183,000 member-owned accounts in 14 counties covering north central Florida. Russell Lott is vegetation management (VM) superintendent and oversees the cooperative’s 13,000 miles of transmission and distribution lines, including 60 substations. That large footprint requires a robust VM program to maintain system reliability, and herbicides play an essential role.

“We systematically apply herbicides on more than 50 miles of transmission and 2,400 miles of distribution each season,” Lott says. “We contract with two spray companies, in addition to having our own in-house crew. From May to October, our crews are on rights-of-way making high-volume foliar applications, transitioning to low-volume backpack applications later in the season. In all, it typically amounts to spraying seven months out of the year.”

“We’ve got lots of fast-growing invasives here that we have to deal with — species like wild cherry, mimosa and chinaberry, along with troublesome vines like wisteria and trumpet creeper,” Lott says. “All those vines have to do is make contact and we’ll get a service interruption.”

Clay Electric guards against that with regular treatment cycles and frequent inspections. “We operate on a four-year cycle with our VM program,” Lott says. “We also have a comprehensive inspection program in place, so we can target any ’cycle busters‘ that pop up on rights-of-way.” 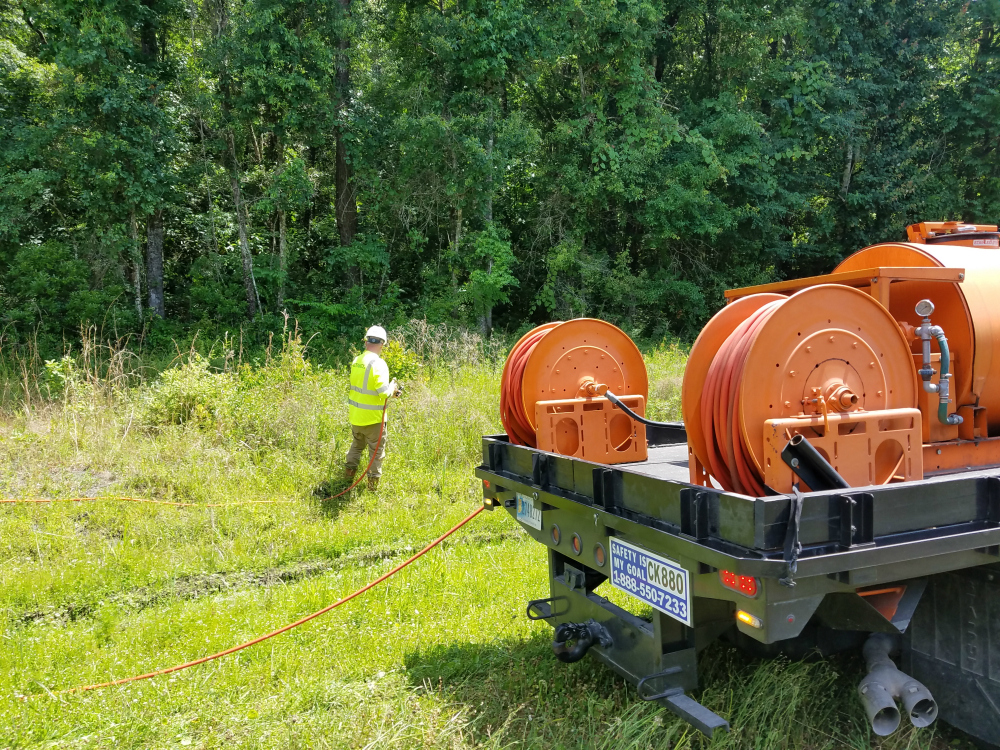 These cycle busters are aptly named because they force treatments to be made outside of the planned cycle and eat up valuable resources. They can quickly throw a wrench in Lott’s ability to manage budgets.

“Our mission is to provide our members with safe and reliable electric service, but accomplishing that requires a lot of vegetation management expense,” Lott says. “So, we have to manage that budget and operate as efficiently as possible. That takes buy-in from our entire VM team.”

One way Clay Electric stays efficient is by not prescribing a long list of herbicides in its spray program. In fact, Lott prefers to have a base tank mix in place that can be utilized for both high-volume foliar applications and low-volume basal bark treatments. It cuts down on inventory and keeps things less complicated for spray crews.

Lott saw years of success using a mix of Garlon® 3A herbicide and Arsenal Powerline herbicide. One downfall was that, in aquatic settings, crews had to switch to Garlon 3A plus Habitat herbicide, because of use site restrictions with Arsenal.

Field experts with Corteva Agriscience™ recommended a new mix of Vastlan and Milestone herbicides. Before fully making the switch, Lott took steps to ensure his team was fully on board, instituting several months of field testing — allowing spray crews to work with it and see results firsthand. It paid off.

In addition to improved brush control, Lott and his crews found that Vastlan and Milestone improved selectivity to desirable rights-of-way grasses.

“This mix has very good selectivity to the grasses we have present on our rights-of-way,” Lott says. “We did see some slight initial browning on desirable grass species from the imazypyr in the mix, but it’s proven to be very short-term.”


Efficiency improved as crews no longer have to switch mixes when encountering water, as both Vastlan® and Milestone® herbicide can be applied to the water’s edge.

Clay Electric’s top priority for its employees and contractors is safety. With the volume of spray work it performs annually, it made sense to look for ways to reduce worker exposure and minimize the possibility for herbicide spills. The answer for Lott came in the form of a closed-loop herbicide delivery system.

“The main driver was worker safety, but we also strive to operate our VM program practicing good principles of stewardship and incorporating industry best management practices,” Lott says. “We found these systems could address both, while also helping remove mixing errors and ensuring the accuracy of herbicide rates. It led us to put out a bid to have our herbicides custom-blended and delivered through a closed-loop system.”

The bid’s winner was Aquimix, Inc., based in Cloverdale, Virginia. Using the Aquimix system, Clay Electric now gets its herbicides in returnable, refillable containers. Its high-volume mix comes custom-blended in 15-gallon drums, and its low-volume mix in 5-gallon cubes. Clay Electric also utilizes the system for its total vegetation control herbicide mix, Milestone, indaziflam and glyphosate, used to treat its substations.

Each container is equipped with bar code identification numbers and delivered on a returnable plastic pallet with a securable lid. The bar code tracking system allows appropriate Clay Electric personnel access to individual drum ID numbers to identify container contents and history. They can also see all unreturned containers in the system to account for product usage. It adds up to better inventory management and more accurate tracking of what products went where, especially helpful in case of landowner complaints.

Lott also discovered that the costs of the system were offset by gains in employee productivity. “I did a cost analysis on using the closed-loop system,” Lott says. “When we are able to consistently reduce our labor by two hours a week, the cost to use the system is comparable to a more manual approach. However, the benefits of the closed-loop system far outweigh manual mixing.”

With its new go-to herbicide mix coming custom-blended through a closed-loop delivery system, Clay Electric has addressed its desire for better brush control and improved worker safety. In doing so, it better positioned its spray program to maintain the highest levels of system reliability for years to come.

™®Corteva Agriscience, Garlon, Milestone and Vastlan are trademarks of Dow AgroSciences, DuPont or Pioneer, and their affiliated companies or their respective owners. When treating areas in and around roadside or utility rights-of-way that are or will be grazed, hayed or planted to forage, important label precautions apply regarding harvesting hay from treated sites, using manure from animals grazing on treated areas or rotating the treated area to sensitive crops. See the product label for details. State restrictions on the sale and use of Milestone apply. Consult the label before purchase or use for full details. Vastlan is not registered for sale or use in all states. Contact your state pesticide regulatory agency to determine if a product is registered for sale or use in your state. Always read and follow label directions.