As an experienced brush fighter, rancher Bob Brockman has a sense for his comparative  return on investment in brush control.

“I think aerial spraying of pricklypear is the biggest bang for the buck we can get.

“Pricklypear is the most invasive species we have, worse than cedar,” he continues. “In the drought, we noticed an exponential growth of pricklypear, and it filled in the voids where it hadn’t been.”

Pricklypear can significantly reduce carrying capacity. It both competes for resources and creates a barrier to grazing. For the Brockman Ranch south of Sonora, Texas, there’s another problem.

“Livestock, sheep especially, will eat pear apples that can impact rumen,” Bob says. “They can die.”

So Bob and Nancy Brockman have fought pricklypear. They’ve battled cedar and mesquite, too. Since they started as newlyweds on the ranch in 1976, they’ve made brush control a continual effort.

“Everyday,” Nancy claims with a smile.

They’ve aerially sprayed pricklypear. Nancy wore out her first utility task vehicle (UTV) hand-spraying mesquite. They both run dozers, grubbing cedar. Bob was first in the area to adopt prescribed burning. Their goats have helped, too. The Brockmans are believers in an integrated approach.

It all shows. Their reclamation and maintenance treatments have yielded some pastures of open grassland dotted only with liveoaks. Some pastures, not all, Bob says. “If you don’t see a pasture very often, and don’t go back there, it’ll turn into a jungle,” Bob says.

So the effort continues.

In March 2019, the Brockmans sprayed pricklypear in two pastures. They used new MezaVue® herbicide in the first year on the market. Bruton Aerial Spraying of Garden City, Texas, flew it on for them at the labeled rate of 32 fluid ounces per acre. 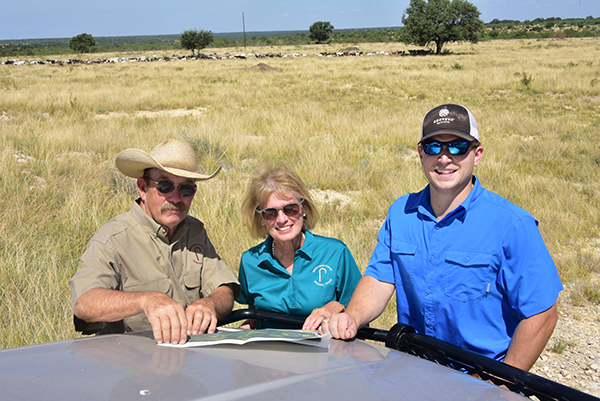 What drew the Brockmans to MezaVue was the touted speed. Their 2019 application wasn’t their first time to spray pricklypear. They had used the old standard pricklypear treatment, Tordon® 22K herbicide, several times. Symptoms were slow to show and full control even slower.

“With Tordon 22K, it could take two years or more to see a sign,” Bob says. “Some pear we sprayed in 2014 looks like it’s still dying. “With MezaVue, I think, in two years it will be gone.”

“It’s an amazing difference,” Nancy says. “Thirty days after spraying with MezaVue, the pear was looking yellow, and in 90 days, necrotic.”

While pricklypear could be sprayed almost any time of year, the Brockmans like spring application for its extra benefit in weed control.

“Not only do we get rid of pricklypear, but we get rid of weeds,” Bob says. “The mesquite isn’t leafed out yet, and the liveoaks aren’t budded. The spray isn’t intercepted so a greater percentage hits the target. MezaVue took (western) bitterweed down to nothing.”

Historically, Brockman Ranch has been in the sheep and goat business. Since 2011, the business has transitioned to hair sheep and hunting of all sorts: axis deer, blackbuck antelope, scimitar-horned oryx and whitetail deer. Drought triggered the change. 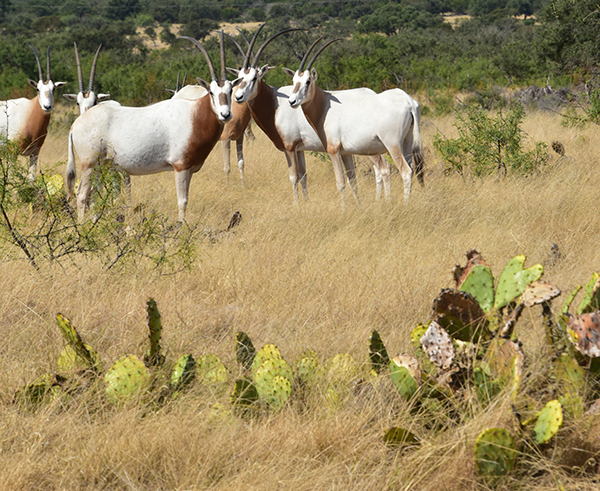 During the drought, the Brockmans reduced livestock and expanded their hunting enterprise. Pictured are scimitar-horned oryx. Pricklypear spraying and moisture in late 2018 and early 2019 have helped pastures recover.

“In the drought, we were looking at each other and wondering what we could do,” Bob says. “We got rid of most of the livestock and got more into hunting.”

“You can make it in ranching, but you have to adapt,” Nancy says. “You have to be willing to change.”

A wet fall 2018 and spring 2019 gave the Brockmans and their pastures their first real shot at drought recovery. The couple made the most of that by getting more pricklypear under control, and faster than before.

“MezaVue is way faster,” Bob says, “but you can’t have results fast enough. “I’d like to see it gone the next week.”

Label precautions apply to forage treated with MezaVue and to manure and urine from animals that have consumed treated forage. Consult the label for full details.

™ ® Trademarks of Dow AgroSciences, DuPont or Pioneer, and their affiliated companies or their respective owners. MezaVue and Tordon 22K are Restricted Use Pesticides. MezaVue is not registered for sale or use in all states. Contact your state pesticide regulatory agency to determine if a product is registered for sale or use in your state. Always read and follow label directions.