1 In cotton-growing regions, refuge requirements are reduced from 50 percent to 20 percent.

European corn borer (ECB) feeds on all above-ground parts of the corn plant. ECB can produce one, two or multiple generations in a single season. First-generation ECB cases whorl damage, while second-generation ECB tunnels through the stalk.

Black cutworm (BCW) is the most damaging cutworm species in corn. Larvae sever plants near the soil line, reducing stands and lowering yields. Damage from BCW is often most evident in no-till or weedy fields, especially in poorly drained areas. Storm systems carry adult BCWs moths to the Corn Belt from the southern United States in April and May each year where they lay their eggs in green fields.

Corn earworm (CEW) larvae, most prominent in southern geographies, causes damage to corn by feeding on the tips of developing ears, but it is also known to feed on the whorl, silks and tassel. Damage to the ear not only decrease yield potential, but also creates an easy entry point for diseases.

Fall armyworm (FAW) overwinters in the Southern United States and migrates north in the summer. Early generations of FAW feed on young corn, from emergence to waist high or approximately V8, and can destroy entire plants. Controlling FAW with traditional pesticides is difficult and often not economical. 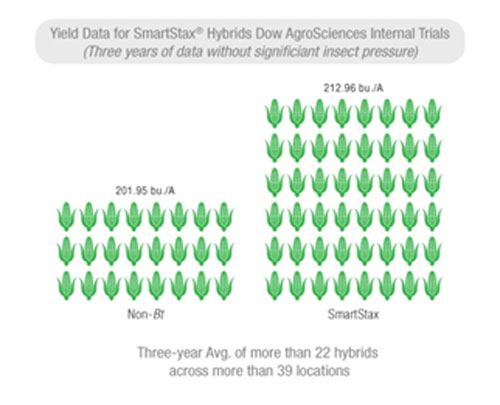 A refuge — an area of non-traited plants — is a key element of IRM. Insects in the refuge are not exposed to the Bt insecticidal protein, allowing them to breed with rare insects that naturally resistant to Bt proteins. Susceptibility to the Bt proteins is passed to offspring, helping to protect the durability of the corn trait. More information, including refuge configuration options, is available in the Product Use Guide for SmartStax®.

Growers must sign a Technology Use Agreement before the purchase and delivery of seed containing Herculex Insect Protection.  Go to www.traitstewardship.com for more details on the Corteva™ Agriscience grower agreement and IRM.

SmartStax® multi-event technology developed by Dow AgroSciences and Monsanto. ®SmartStax and the SmartStax Logo are registered trademarks of Monsanto Technology LLC. Always follow IRM, grain marketing and all other stewardship practices and pesticide label directions. B.t. products may not yet be registered in all states. Check with your seed representative for the registration status in your state. Always read and follow label directions.