Today, American agriculture is a trillion-dollar industry. The U.S. is the top food exporter in the world, with California producing more food than any other state. And many of the successes of U.S. agriculture wouldn’t have been possible without the outstanding contributions of women.

Despite more than half of U.S. women in agriculture perceiving widespread gender discrimination within the industry as recently as 2018, women scientists and farmers have long been overcoming barriers and leaving their mark on our food supply and farming methods.

In honor of Women’s History Month, we’re sharing the legacies of several women who made a major impact in American farming.

Born in 1844 — well before women could vote or independently own property — Harriet Williams Russell Strong may seem an unlikely agricultural innovator. However, she laid the foundation for California to become a top food producer.

Unlike many women of that era, Strong’s early life did not include farming; instead, she was educated by private teachers and attended Young Ladies Seminary in California before marrying at the age of 19 and giving birth to four daughters. But her husband’s death completely changed the trajectory of her life.

Widowed at 39, Strong devoted her time and energy to managing and developing the property her husband owned in southern California. The land required irrigation to produce fruit, so Strong figured out how to conserve flood waters and irrigate the arid acreage. Within five years, the land turned a profit, and she eventually became the leading commercial grower of walnuts in the country.

Strong filed patents for irrigation system inventions, as well as dam and reservoir construction, and became an advocate for water conservation and a national irrigation system. During World War I, Strong presented Congress with a plan to dam the Colorado River, which she said would allow farms in the Southwest to grow food and supply it to the Allied troops and victims of war.

The plan was not implemented in her lifetime, but the idea lives on today. The All-American Canal, which was based on Strong’s plan and carries Colorado River water to California’s Imperial Valley, was completed in 1942. Today, the Imperial Valley is the largest alfalfa growing region in the world and an important hub for vegetable and livestock farming. 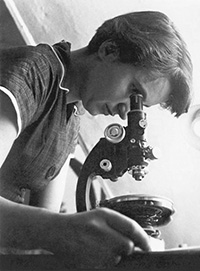 You may not know her name, but you almost certainly know Rosalind Franklin’s work. Her 1952 x-ray images revealed the double helix structure of DNA, laying the groundwork that led to genetic engineering and genetically modified organisms, including pest-resistant corn and soybean varieties, as well as nutrient-enhanced rice that can help prevent many cases of blindness caused by vitamin A deficiency.

James Watson and Francis Crick, the two men who are generally credited with “discovering the structure of DNA” (and won the 1962 Nobel Prize in Physiology or Medicine for the achievement), created their model of the double helix after gaining access to Franklin’s photos and data without her permission.

Despite the lack of acknowledgment for her work, Franklin continued working in the sciences. From 1953 on, she studied the structure of viruses, beginning with the tobacco mosaic virus and continuing to the pea streak, tomato bushy stunt, potato virus and others. Her work was so ahead of its time that her collaborator at the institution that funded her work stopped sending viruses for examination.

Though Franklin was never honored with a Nobel Prize, her legacy lives on as farmers and gardeners routinely purchase and plant virus-resistant varieties of tomatoes and other plants.

The Women’s Land Army of America

A literal army of women kept American agriculture going during World Wars I and II. As men answered the call to serve in the military, women stepped forward to take their places in the field.

During World War I, a number of women’s universities, including Vassar and Bryn Mawr, started training women to work the land. The Women’s Land Army of America (WLAA) was officially launched in late 1917; its recruitment slogan was “Joan of Arc Left the Soil to Save France. We’re Going Back to the Soil to Save America.”

Approximately 20,000 American women responded and served in the WLAA during World War I. Despite the fact that most had no previous farm experience, these “farmerettes,” as they were called, plowed fields, drove tractors, and harvested crops. These women and the Women’s Land Army served their country again throughout World War II.

According to the Bureau of Agricultural Economics, more than 2 million American men left farm jobs between April 1940 and July 1942. The Women’s Land Army was reactivated in 1943; as a result, 1.5 million women without farm experience were placed in agricultural jobs between 1943 and 1945. By the time the war finally ended, U.S. food production had increased by nearly one-third over pre-war levels — thanks in part to the hard work of these many women.

Extreme weather – including flooding and drought — contributes to 90 percent of crop losses in the United States. But Jennifer Doudna’s work may help pave the way toward new varieties of drought- and pest- resistant crops in the future that also pack a nutritional punch.

Douda, an American biochemist, and her French colleague, Emmanuelle Charpentier, won the 2020 Nobel Prize in Chemistry for their ground-breaking work in CRISPR gene editing. Their discovery enables scientists to quickly (and relatively easily) edit the genome of an organism, allowing them to add desirable traits to plants without affecting any other traits.

“Through the development of crops engineered to be healthier and more sustainable, food will likely be the first way most people personally experience [CRISPR] technology,” Douda explained in a 2018 Financial Times article. "Whereas traditional [plant] breeding techniques often select for one trait (say, high yield) at the loss of another (say, nutritional value), CRISPR editing ameliorates the need for these trade-offs. An edit to one gene can readily be added to a varietal with other positive traits.”

Scientists have already used CRISPR gene editing to create powdery mildew-resistant wheat and high-yielding rice and fruit variants. Though CRISPR-edited crops are not yet commercially available for human consumption, many scientists believe that gene-edited crops will eventually bolster the world’s food supply.

Inspiration from the past spurs innovation for tomorrow

American women — and women worldwide — continue to build upon the discoveries of these agricultural innovators as successful farmers, plant breeders, agricultural researchers, agronomists and more. Today, 31 percent of farmers in the United States are women, and 43 percent of the agricultural labor force in developing countries is female.

One thing is certain: No matter where they may be located, women are and always have been at the forefront of efforts to innovate agricultural practices and feed communities. May their determination fuel the innovations of future generations.

Learn More About Women in Agriculture

See why Kristin Quist, a 5th-generation farmer from Deer Park, Wisconsin is optimistic about the future of women in agriculture.

Hear from women at Corteva Agriscience on how their roles in agriculture were shaped.
Watch now

Read the results of Corteva's study on the importance of women in agriculture and the barriers they face.