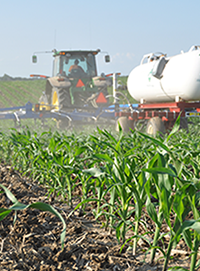 Most carbon sequestration programs promoted today focus on capturing carbon in the soil using a range of practices. Compensation earned through a carbon program can alleviate some of the financial risk that farmers assume when introducing those practice changes by offsetting some of the costs. While most programs emphasize introducing cover crops and reducing tillage, there’s another lever to reduce carbon on the farm: managing nitrogen.

"Climate change discussions often focus on reducing carbon dioxide into the atmosphere, but there are other gases that could be influential also, such as nitrous oxide," says Michael Moechnig, field scientist for nitrogen stabilizers, Corteva Agriscience.

Nitrous oxide, or N2O, when released in the atmosphere can be a potent greenhouse gas that has nearly 300 times more heat-trapping power than carbon dioxide. And once released, the nitrogen benefit to your crop is lost. Fortunately, there are tactics you can use to help keep nitrogen where you need it, not only out of the air, but in the crop root zone helping boost yields.

In peer-reviewed research, nitrogen stabilizers, specifically like N-Serve® and Instinct NXTGEN® nitrification inhibitors, have been shown to reduce N2O release by up to 51% while improving nitrogen retention and helping reduce nitrogen leaching by keeping it in the ammonium form, which is less mobile. Nitrogen stabilizer use will likely become more important as attention turns to N2O and its role as a greenhouse gas.

Moechnig explains that while nitrification inhibitors can reduce release of nitrous oxide, it's a kind of secondary benefit. "These stabilizers inhibit conversion from the ammonium to the nitrate form, which is the form that can be converted to N2O," he says.

Once nitrogen turns to its nitrate form it can leach into the soil profile, but that's also the major form from which N2O can be released. "Optinyte can reduce two significant nitrogen loss paths by inhibiting the process that converts ammonium to nitrate in the soil."

Managing Greenhouse Gases From the Farm

Corteva Agriscience introduced its new Carbon Initiative to support farmers who want to adopt soil health practices that draw carbon into the soil or reduce greenhouse gas emissions. The company launched the program in 2021, working with Ecosystem Services Market Consortium (ESMC) to measure and verify the value of those practices, and to market the stored carbon and greenhouse gas assets to buyers who want to offset their emissions and reduce their supply chain carbon footprint. The program will be expanded for crop year 2022, with more states and crop types, as a result of a collaboration with Indigo Ag that leverages their strong capabilities in measuring, verifying and selling the premium credits buyers want. In keeping with Corteva’s commitment to give farmers increased choice and match with the right program to meet their needs, current ESMC customers can choose the program in which they want to participate.

Corteva is looking at the broader picture of greenhouse gases, and nitrous oxide belongs in that conversation. "A lot of press is focused on soil carbon and sequestration," says Neville Millar, a project manager at ESMC. "The nitrogen cycle is complex and nitrogen can take many forms. Irrespective of its source; synthetic fertilizers or manure, it can be emitted into the atmosphere."

Nitrification inhibitor use with manure has also shown benefits in managing nitrogen and maintaining it in the soil profile.

Millar and Moechnig note that having nitrogen available closer to when the plant needs it is important. However, that's not always possible. As combines roll in the Midwest, and once soil temperatures cool below 50 degrees F, anhydrous ammonia is often applied to prep for that following-year crop.

"Fall anhydrous is still a major time for applying nitrogen," says Moechnig. "Optinyte is a useful tool for keeping that nitrogen in a stabilized form into the winter months."

Moechnig adds that it is also important to stabilize spring nitrogen applications. "Heavy spring rains on already moist soil can result in nitrogen leaching or cause saturated soil conditions that result in the denitrification that produces N2O gas emissions."

When managing the nitrogen rate, being more precise about the amount of nitrogen used can be part of the N2O management equation. "In many cases nitrogen rates can be reduced without reducing yield, in order to get a better economic outcome in the field," Millar says. "That's tough to match in every field in every year, with, for example, changing weather patterns, but tools are available. "

As Millar notes, rate is one of those "R's we talk about" meaning the 4Rs – Right source, Right rate, Right time and Right place. All these matter when evaluating a fertilizer program. As N2O gets more attention, rate may become a more important R in that system.

An Impact that Lasts

Practices like reducing tillage and planting cover crops can have a meaningful impact on carbon sequestration and increase soil carbon, while emitting less nitrous oxide can alleviate greenhouse gas emissions. Not surprisingly, implementing multiple practices on the same field will result in greater impact, and that’s what carbon programs reward.

Millar raised an interesting point, however, in the N2O discussion. With carbon markets, permanence for soil carbon sequestration is a major issue, and nitrous oxide reductions can help fill a need for reduced greenhouse gas emissions from agriculture. "There's growing interest in nitrous oxide and nitrogen management in general because there are fewer issues with permanence, or how long you can maintain that practice," Millar notes. "If you prevent nitrous oxide release into the atmosphere initially by reducing nitrogen rate, permanence is not an issue, because the emissions were never made. Simply put, if you reduce the rate, you don’t emit as much nitrous oxide into the atmosphere."

The sustainable farming conversation is evolving. Nitrogen management is another area to watch and may offer opportunity for the future. Today, keeping nitrogen where you need it to boost crop yield and maximize returns, still matters.