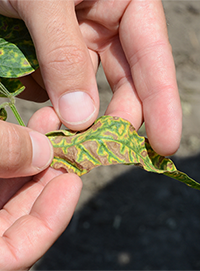 As the soybean season progresses, pods fill and lush vegetation creates that familiar green canopy, but the image can be scarred by late-season diseases. Depending on your geography, you could be facing different problems and scouting remains important.

"As we go into harvest timing, even later season diseases in the Diaporthe species complex – pod and stem blight, stem canker can easily be confused with brown stem rot or sudden death syndrome," says Kaitlyn Bissonnette, University of Missouri Extension plant pathologist. "It's really important to be fully scouting fields, not making assumptions as you drive by at 50 mph."

She acknowledges that later in the season, there are fewer management actions you can take. "A lot of it is really about figuring out the field history and implementing a strategy for 2022," she says. "You want to select soybean varieties based on fields that were especially hard hit."

While rotating to a non-host crop might help reduce spore load, the field history matters since most key diseases thrive in soil, Bissonnette says.

Taking action late in the season

In the north, white mold can strike when soybeans are looking good. There are treatments for this disease, provided you catch it in time. The challenge is inconsistency even in fields with a history of white mold. Preventive fungicide sprays may help but consulting with your crop adviser on a plan may make sense.

"Spraying later is important because there's still a chance to capture and preserve yields," says Brent Carmien, crop protection territory manager, Corteva Agriscience. "You have to be continually scouting, especially for white mold, and pay attention to the environment."

Farther south, though this is changing, frogeye leaf spot is a problem. "We see frogeye leaf spot in the mid- to upper canopy and it's pretty commonplace in the central Midwest," adds Bissonnette. "It's often found more in the southern Midwest, but it was first reported in North Dakota in 2020."

She adds that keeping on the lookout for frogeye leaf spot is important, especially if you're in a warmer, wetter area and continue to have moisture through R4 and R5 – those grain fill times. Those are conditions where you might also find sudden death syndrome.

Frogeye leaf spot can also be treated, so late-season scouting has value. Carmien adds that if you have fields that seem to get the problem over again, preventive spraying may make sense. "There's still a chance to capture and preserve yields if you treat," he says.

And while moisture is a common denominator for a lot of diseases, Bissonnette notes drier areas are not left out. "You're likely to see charcoal rot in drier regions, especially fields with a history of the problem in the past," Bissonnette says. "This pathogen has a relatively broad host range, it can also impact corn, so that is something to keep in mind."

She adds that the pathogen can survive for years in the soil, so it can return when dry conditions reoccur too.

There is one late-season action to consider if the Diaporthe complex of fungi, such as Phompsis or the pathogen that causes pod and stem blight, begin to cause seed decay in your fields. "If we start to see those in the field, we want to be getting the grain out as quickly as possible to reduce impact," Bissonnette says.

Evaluating diseases in your field this year can help you plan for next year. "You can consider seed treatment options," Bissonnette says. "That's especially true when we think about SDS."

One set of challenges is the water molds Pythium and Phytophthora, which can be a significant problem in wet weather. Bissonnette shares stories of producers who had to replant twice in 2021 because of early season diseases. Seed treatments can help mitigate those losses.

First step is to evaluate the varieties you want to plant in 2022. Selecting for resistant varieties for key diseases in your fields can pay off. Genetic resistance can be a valuable tool.

Second is to consider the seed treatment program you select. Soybean producers have a range of options, but new treatments are coming to market that offer longer control and protect against an increasing number of diseases.

Often there's talk that pathogens reside in residues, but Bissonnette says those responsible for seedling and early season disease live mostly in the soil, so significant changes to residue management may have little value. "Charcoal rot and SDS can survive on residue, but the actual pathogen for both can survive in the soil in the absence of the residue. You don't have to leave your no-till program behind," Bissonnette says.

Cultural practices can make a difference for some diseases. Carmien points out that to avoid white mold, planting in wider rows with lower populations can reduce risk.

Planning for 2022 does mean looking back at 2021 for disease management. Scouting crops in-season offers a significant payoff.