When it comes to soybean weed control, it’s important to have as many tools in your toolbox as possible to keep your fields as clean as possible. Experts recommend creating a program approach to weed control that includes several herbicide applications, with multiple modes of action and residual activity, as an important base line.

However, they also recommend cultural practices whenever possible to help keep weeds suppressed. One of those practices is the use of cover crops. Bradley Mason, Matthew Montgomery and Pat Reeg are all Pioneer agronomists located in Illinois. They have advice to help you decide if you want to include cover crops on your soybean operation for weed control.

First off, the agronomists say, the most obvious benefit of cover crops during late fall and winter is that you can expect fewer weeds in spring, because those cover crops will compete with weeds in soybean fields.

“Cover crops can help prevent weeds by having vegetative cover coming out of winter. The fact that the cover crops are actively living helps reduce the amount of weed seeds surviving due to competition,” Mason says.

To put an even finer point on it, cover crops will basically starve weeds out.

“Weeds compete for moisture, nutrients, light and space. They must have light to survive. The period of time immediately after a seed germinates is critical because the young plant must photosynthesize quickly; otherwise, it will tap out all the carbohydrate reserves in the seed and die,” Montgomery explains. “By shading the soil, we provide a light barrier that costs germinating weed seeds dearly.”

“Cover crops can help prevent weeds by having vegetative cover coming out of winter.”

And those weeds include some pretty tough customers, including herbicide-resistant varieties.

However, cover crops can help with more than just weed control.

“Cover crops can be beneficial to the soil through building organic matter and soil tilth in the process. By adding cover crops in, you can create some healthier soil environments for the following crop,” Mason explains.

Montgomery adds: “Cover crops are also one of the best ways to sequester nitrogen and hold it in the field rather than have it move off-site into waterways or the atmosphere.” 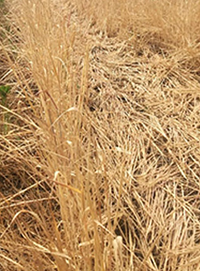 When it comes to choosing the right cover crop for your soybean fields, all three agronomists say one crop comes to mind immediately.

“Cereal rye seems to be the most popular, as it is winter-hardy and can grab excess nutrients in the soil,” Reeg says.

“Cereal rye’s ease of establishing late in the fall after corn is harvested and its ease of termination seem to make it the best choice,” Mason adds.

Depending on your location, you will likely need to plant cereal rye in the late summer or fall months. You’ll want to discuss timing with your local ag retailer or other advisers, depending on when you harvest and when you plan to perform other fall fieldwork like herbicide applications.

“Cereal rye’s ease of establishing late in the fall after corn is harvested and its ease of termination seem to make it the best choice.”

You’ll also need to remember cover crops come with their own risks and challenges. They need to be terminated at the end of the season and can sometimes pose difficulties in that regard.

When it comes to utilizing cover crops, the agronomists say this can be a great practice to help manage herbicide resistance in weeds. The crops help farmers rely less on herbicides and switch up modes of action.

“From a strictly weed management perspective, cover crops represent a very different ‘mode of action’ in the field. Our toolbox of synthetic herbicides is finite.”

“In the area I support, about 20% of the acres are non-GMO soybeans. Controlling weeds, especially waterhemp, is becoming more challenging with herbicides alone. Cover crops could be used in combination with herbicides for improved weed control throughout the growing season,” Reeg explains. “Cost share and carbon sequestration programs may drive adoption on more acres in the future, as well.”

All in all, cover crops can be an effective tool for keeping your soybean fields clean, and they can bring other added benefits, as well. To find what works best on your farm, talk with your trusted advisers and local Corteva Agriscience and Pioneer representatives to make the right plan.