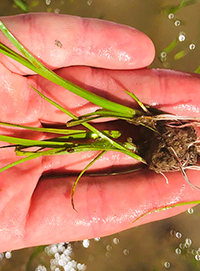 Being the first to try a new production practice has never deterred the team members at Isbell Farms. That’s why they seized the opportunity to put urea impregnated with Loyant® herbicide to the test against the toughest aquatic and sedge weeds.

“I was pretty much all-in on the first call. Once our co-op agreed to impregnate our urea with Loyant, it was just a matter of where it fit best,” says Jeremy Jones with Isbell Farms. “We had great success with Loyant controlling aquatic weeds and sedges that are very problematic in a water-seeded environment.”

Isbell Farms, a family operation in Arkansas’ southern Lonoke County, is a bit unusual for the area. The continuous rice farm is 100% zero grade. Much of the rice acreage is water-seeded with pre-sprouted hybrid rice flown into 4 inches of water.

The family members began water-seeding in the early 1980s to control red rice, borrowing aspects of their water-seeding system from California. Unlike their West Coast colleagues, their zero-grade rice fields are continuous with no levees pulled to separate rice paddies. The smallest field is 10 acres, and the largest is 85 acres.

“We water-seed to get the rice planted, hold the water long enough to get ahead of grassy weeds and red rice, and then we treat it like we would conventionally planted rice,” Jones says.

“The only way we could get the rice planted in our heavy buckshot soil was to water-seed,” he says. “We do some conventional tillage and drill-seeding of rice. But, by and large, it seems like the last five to seven years if we are going to get a crop in, it’s going to have to be water-seeded or we won’t get a crop in on time.”

“We knew Loyant would give us control, but we weren’t sure how to get it out there,” Jones says.

Impregnating 150 pounds of urea fertilizer solved that issue. Jones normally splits his urea applications into three shots. In 2020, he impregnated his first 150-pound shot of urea with either a 12-ounce or 16-ounce rate of Loyant herbicide. While he wanted to test both herbicide rates, Jones says, he will move forward with only the full labeled rate of 16 ounces per acre based on weed control performance and company recommendations.

Jones’ primary targets were smallflower umbrella sedge and various aquatic weeds such as ducksalad, arrowhead and creeping burhead and redstem.

“Loyant took the aquatics out,” Jones says. “In one field, we had populations of smallflower umbrella sedge that were 6 to 8 inches tall and were so thick you couldn’t see the rice. I didn’t expect Loyant to do what it did, but it just annihilated that stuff. This is a weed that usually can only be controlled when it is a very small seedling. Loyant completely wiped it out, and it didn’t come back. I was very impressed.”

Jones’ fields treated with the urea-impregnated Loyant performed on par with his other fields without any negative yield response.

“One field, according to our yield monitor, had a dry yield of 243 bushels per acre. I’ve never been in rice like that before. That field always yields well, but that was an incredible field of rice,” Jones says. “Using impregnation makes Loyant easier on the crop, which is another added benefit.”